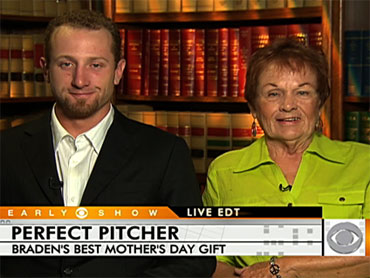 On Sunday, Oakland Athletics' pitcher Dallas Braden pitched the 19th perfect game in major league history against the Tampa Bay Rays. The historic achievement was made sweeter by Braden's grandmother, Peggy Lindsey, who was in the stands for the Mother's Day win. Lindsey helped raise Braden after his mother died of cancer when he was a teenager.

On "The Early Show," Lindsey said she knew something special was happening around the 7th inning.

As the game went on into the ninth inning, Lindsey's nervousness grew for her grandson.

She said, "After the second out in the ninth inning, I started making my way down towards the field. And I climbed up on the dugout, and then got pulled off of there real quick. But very exciting. Very exciting."

Braden said as the game went on, he, too, grew aware of the situation.

"You're aware of where you're at in the lineup more so than the extreme detail of have you walked anybody or has anybody gotten a hit. You obviously notice that. And I've said before, you know, I notice we started to get to their guy a little bit and Shields is a great arm, great pitcher. So anytime you start to scratch runs across, the inning gets extended, you're checking the scoreboard. So you become a little more aware of the situation."

"Early Show" co-anchor Harry Smith pointed out that Tampa Bay is one of the hottest teams in baseball -- with great hitters.

Braden replied, "That's a pretty formidable lineup over there. They've got all the speed in the world. I mean, they could probably compete in the summer games on a track team somewhere. They've got just absolute speedsters and all the right power in all the right places up and down that lineup. ... So to be able to dodge some bullets that day was exciting."

After his final pitch Braden found his way to his grandmother and gave her a long hug.

"There's really no words could I have came up with to convey to her how I felt and how much it meant to have her there and experiencing that with me," Braden said. "I wouldn't have been there on that day if it wasn't for her. And all the glory to her. There's no way that that was possible (without her) and I'm glad that I was able to give that to her on that day."

Her comments came after a tense interaction between Braden and the Yankees' Alex Rodriguez after he walked over the pitcher's mound in an April game.

Since his perfect game, however, the once no-name pitcher has made his mark in the history books and in the media. This week he hosted David Letterman's top 10 list and graced the cover of Sports Illustrated.

But Braden assured Smith he's not letting all the fame go to his head.