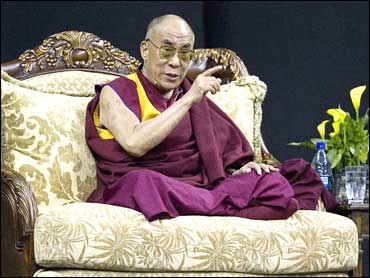 The Dalai Lama on Sunday criticized Chinese policies in his Tibetan homeland, calling on rulers in Beijing to grant Tibet something just short of outright independence.

Making an unscheduled appearance at a luncheon in Chicago, the exiled Tibetan leader said dissatisfaction with Chinese rule runs wide and deep.

The 71-year-old said "meaningful autonomy" would provide an answer.

"Once we get meaningful autonomy ... we will be loyal and there will be more unity and genuine stability ... and genuine prosperity for Tibet," he said.

The Dalai Lama, wearing his maroon and saffron-colored robes, spoke just feet from VIPs at the luncheon, including Sen. Dick Durbin and the wife of Chicago Mayor Richard Daley.

"We are trying to tell the Chinese government the present policy is counterproductive," the Dalai Lama said.

The exiled spiritual and political leader of Tibet visited Chicago on the last leg of his 12-day U.S. tour.

At a public speech earlier in the day, he spoke of tolerance, forgiveness and other universal virtues before thousands of onlookers.

He also discussed the human desire for wealth, interspersing his comments with frequent laughter and jokes.

"All people want more — the moon, ultimately maybe Mars," he said, giggling. "I think the sun's not a problem. Too hot."

He also spoke of the commonality of world religions while sitting on a ten-foot high gold and red throne, flanked on either side by a dozen monks.

"All religious traditions have the same potential and all carry the same message — of love and compassion," he said.

The Dalai Lama was to give another talk later in the day entitled, "Finding Inner Peace in a World of Turmoil."

During earlier visits across the country, the Nobel Peace Prize winner said Tibetans would live in harmony with the Chinese if the ruling Communist Party would allow them to govern themselves.

About 300 Tibetans live in Chicago, according to the Tibetan Alliance of Chicago, which is hosting the Dalai Lama's visit.

But up to 11,000 Buddhist devotees, as well as non-Buddhist well-wishers, were expected to see the Tibetan leader at Sunday's events.

Before arriving in Chicago for his fourth visit to the city, the Dalai Lama also stopped at well-attended events in San Francisco, Houston and Madison, Wisconsin — speaking on themes of love compassion and his Tibetan homeland.

He was scheduled to leave Chicago on Monday, heading to Australia.

The Dalai Lama, whose worldly name is Tenzin Gyatso, fled Tibet in 1959 after the Chinese quelled a popular uprising. He is still widely revered in Tibet, though he is now based in Dharmsala, India, where he heads a government in exile.

He was proclaimed the 14th Dalai Lama at age 5 and became Tibet's leader at 15.