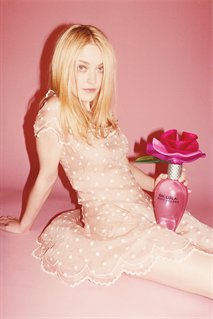 (CBS) Actress Dakota Fanning is apparently too racy for Britain. The 17-year-old star's magazine ad for Marc Jacobs' Oh Lola! fragrance has been banned by The Advertising Standards Authority in the U.K., reports BBC News.

The ad shows the actress in a pink, thigh-length polka-dotted dress with a large flower-topped perfume bottle between her legs.

The U.K.'s Ad Standards Authority said "the length of her dress, her leg and position of the perfume bottle drew attention to her sexuality. Because of that, along with her appearance, we considered the ad could be seen to sexualize a child."

Coty U.K., the maker of the perfume, argued the ad was "provoking but not indecent."

But the ASA described the ad as irresponsible, saying it will likely cause "serious offense."

Tell us: Do you think the ad should be banned?