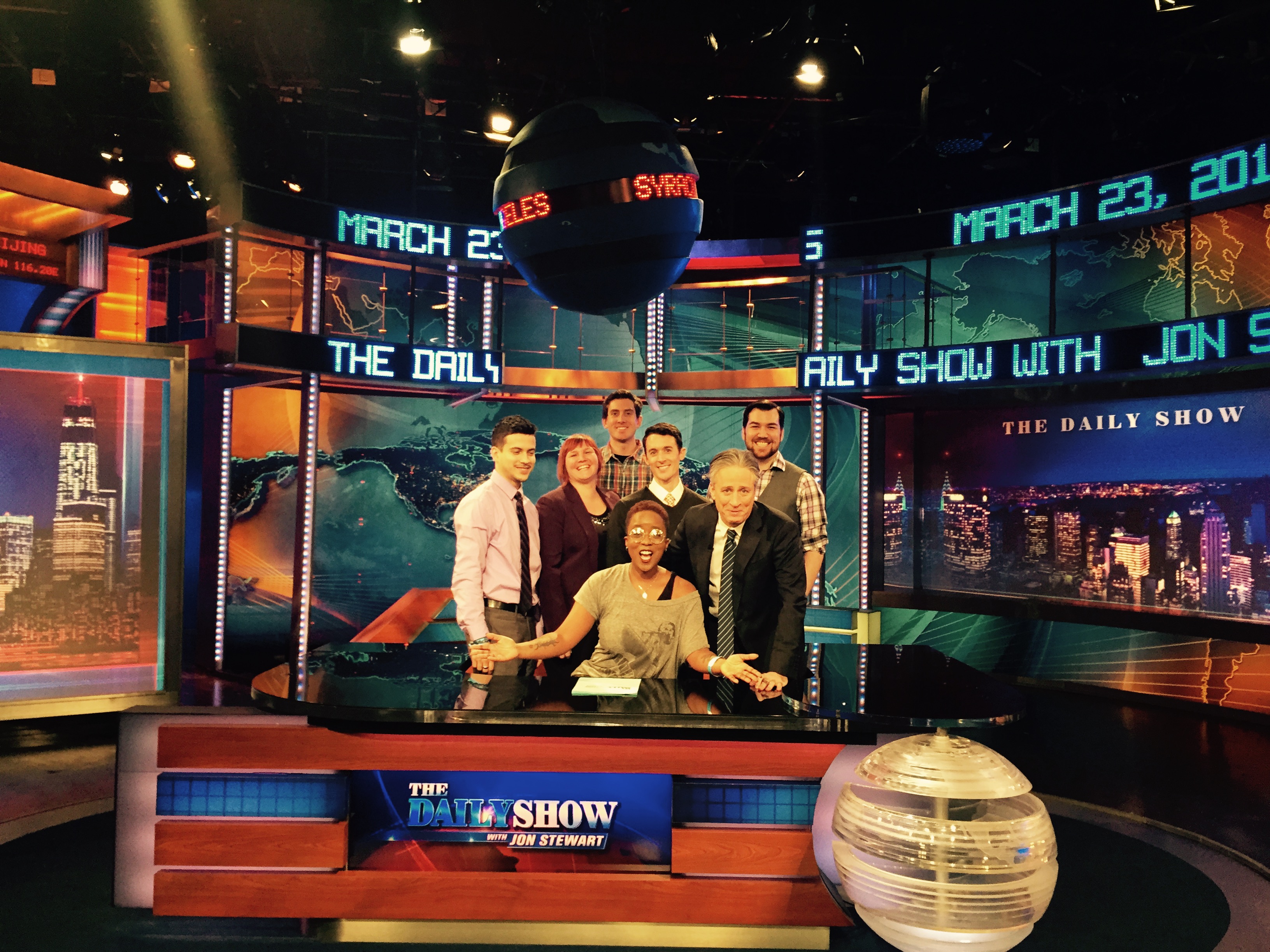 "Daily Show" host Jon Stewart is known for using satire to criticize the wars in Iraq and Afghanistan. But he is also a strong supporter of those serving in the military, helping veterans find jobs, reports CBS News correspondent Jim Axelrod.

When American Corporate Partners approached Stewart about becoming a mentor, he decided to be more ambitious and tasked his staff with a mission to create a program that would prepare military men and women for careers in the competitive landscape of entertainment.

Before those lucky enough to score tickets to a "Daily Show" taping hear from Jon Stewart, they're greeted by Justine Cabulong who offers an entertaining delivery all her own.

"It's been a pretty --- a really wild ride. It was just amazing to know that I was going to be part of something that I thought was so brilliant," Cabulong said. "I just felt so lucky and there's nothing that can express that.

Lucky, because Cabulong's path to a career in television wasn't a traditional one.

She was an active duty Marine for four years and stationed at Camp Leatherneck in Afghanistan from 2010 to 2011.

"It was very, very difficult and I was like 23 or 24 at the time. I'm so grateful for that time. But I loved what I did there," she said.

Because, among other things, that time as a Marine is what earned Cabulong her chance at the "Daily Show," whose host launched the Veteran Immersion Program three years ago.

"The most important thing to me, honestly is opening up those avenues that just were closed down," Stewart said.

Since the program's launch, nearly 75 veterans have gained exposure to the entertainment industry and jobs that are often elusive to those without the right connections.

"The big banks recruit from the Ivy League colleges. That's where they get people. You go to a college that's not that and you may feel intimidated by that culture. You spend a day at that bank and go 'Oh, half these guys are f---ing idiots.' And it suddenly becomes more accessible to you because you don't realize it's been demystified because you've been held away from it," Stewart said.

"Daily Show" staffers Camille Hebert and Elise Terrell said it helps get their foot in the door.

They created and manage the six week program, which looks to recruit men and women who are decisive under deadline.

"There are no IEDs. There's nothing that is a real threat to us. But yet we have this level of urgency," Terrell said. "I think a lot of the veterans really do appreciate and understand that yeah, if you're going to work 110 percent to make it right there is going to be stress. So I think for them it's a refreshing type of stress."

So far about 30 percent of those looking for work at the end of the program have landed jobs at a number of media outlets; two of them, at the "Daily Show" -- Cabulong and Nate Witmer.

Before he became an associate producer at the "Daily Show," Witmer led a platoon in Iraq.

"We were in a fairly kinetic environment as they call it," he said.

It was his military experience, he said, that equipped him to succeed in this line of work.

"I think not just for me, but for veterans in general, from the very beginning they're trained to take the initiative, to lead in the absence of orders. So I think veterans, as a population have that initiative," Witmer said.

Stewart and his staff kept their program for veterans under wraps while it was being developed, but now they're hoping to share it with anyone willing to follow their lead.

"This isn't charity for them; they're more than qualified for this. There is nothing here that they can't accomplish," Stewart said.

Just ask Cabulong, who remains a captain in the Marine Reserves while focusing full-time on the career she's always wanted.

"It completely, you know, gave me my dream job and I can't wait to see what else is in store," she said.

For more information about the program, email veteranprogram@thedailyshow.com.