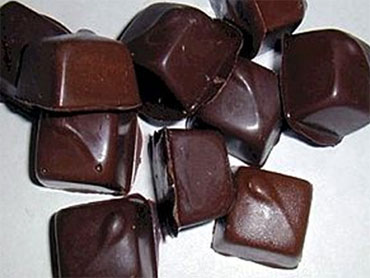 (CBS) A new study claims that daily consumption of dark chocolate can reduce the risk of stroke and heart attack in some high-risk patients.

The study published in the journal BMJ looked at 2,013 people with hypertension and metabolic syndrome, a combination of medical disorders that signals a risk for heart disease, and used a mathematical model to find that daily consumption of about 3.5 ounces of dark chocolate over ten years would decrease the risk of cardiac events.

Researchers found that, depending on how well people stick to eating their daily dark chocolate, between 65 and 85 cardiac events could be prevented per 10,000 people over 10 years.

In short, as researchers say, "Daily dark chocolate consumption could be an effective cardiovascular preventive strategy (for people with the above conditions)."

The study's authors noted that the study only applies to dark chocolate - not milk or white chocolate - probably due to the higher concentration of flavonoids, which are "known to have heart protecting effects," in dark chocolate.

Others are less certain about the study's daily chocolate recommendation.

"I suspect that consuming dark chocolate every day for 10 years may have unintended adverse consequences," Kenneth Ong at the Brooklyn Hospital Center told Reuters. Ong described the study as "more hypothetical than proven" and went on to point out that consuming additional sugar and calories is potentially not a good course of action for patients who are overweight or at risk for diabetes.

Officials continuing to investigate deaths at Bahamas resort
Thanks for reading CBS NEWS.
Create your free account or log in
for more features.
View CBS News In
CBS News App Open
Chrome Safari Continue
Be the first to know
Get browser notifications for breaking news, live events, and exclusive reporting.