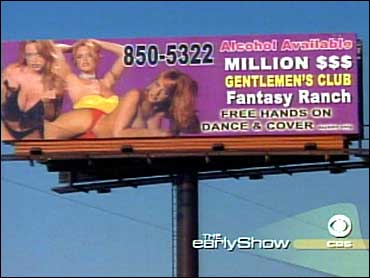 Five year-old Taylor Ray has already learned his ABCs, but on a recent drive with his dad Jim, Taylor spotted a string of letters that didn't spell any word he knew.

Billboards hawking strip clubs and "adult" stores are what caught Taylor's eye. There are dozens of them on a stretch of Interstate 70, between Kansas City and the Ray's home in Columbia. And even though they're meant for adults, with words like "toys" on the signs, they're bound to get the attention of kids like Taylor and his sister, Melanie.

"What can I do about it?' asks Taylor's mom, Stacey, "I can't say,'Close your eyes from here to Kansas City!'"

The signs can turn a simple drive with the kids into an unwanted discussion about sex.

Jim Ray says, "I do resent the fact that I'm forced to make this decision to talk to my kids about these issues prematurely - because of what is on the freeway."

Beware Of The 'Bridezilla Syndrome'

Of course, this problem isn't limited to Missouri. Parenting experts say it's getting harder and harder to go anywhere today without getting bombarded by sexual images.

Psychologist Robin Goodman says, "It's a billboard today, it's in a newsstand tomorrow, it's a TV commercial the next day. Parents have to get their heads out of the sand."

And it's not just out there; it's also in cars. One of the hottest new features in minivans is the DVD player that allows kids to watch movies or cartoons. But not all passengers are kids. And sometimes, what is playing isn't exactly G-rated.

Imagine this dilemma: you pull up to another car, kids in tow, and see a dirty movie playing next to you. It's enough of a complaint that lawmakers in Louisiana and other states are now trying to ban sexually explicit movies from cars.

Sen. Matt Bartle says, "The whole idea is that we want to shut down the proliferation of billboards advertising strip joints."

But isn't Missouri the "Show Me State"?

Sen. Bartle says, "What we're going to do is show the rest of the country how to deal with this garbage."

Yet don't expect the road to be squeaky clean anytime soon.

Sen. Bartle says he is fully expecting to be sued over the First Amendment on this law, and yet he thinks he will prevail.

He says, "This is a form of commercial speech, and therefore, the level of scrutiny is different than it is for individual speech - more relaxed."

And the Rays say they have rights, too: To protect their kids at home, and on the road.

Jim Ray says, "I feel like, as parents, we should have the right to introduce this topic to our children at the time of our choosing and not at a time chosen by pornographers. In today's culture they just have one fleeting moment of innocence."