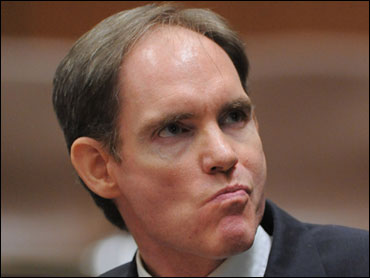 (AP Photo/Daily Breeze)
LOS Angeles (AP) A father who had no interest in his 4-year-old daughter did the unimaginable - hurling her off a 120-foot cliff to avoid paying child support, a prosecutor said Monday during the man's murder retrial.

Cameron Brown, 47, was charged with one count of murder and the special circumstance allegations of murder while lying in wait and murder for financial gain in the death of Lauren Sarene Key in November 2000. Brown, a former American Airlines baggage handler, has pleaded not guilty and faces life in prison without parole if convicted.

Deputy District Attorney Craig Hum said during his opening statement that Brown killed Lauren because he didn't want to pay about $1,000 a month in child support.

Defense attorney Pat Harris countered that it was an accident when the girl fell from Inspiration Point in Rancho Palos Verdes.

Hum portrayed Brown as an uncaring father who tried to shirk his parental responsibility at nearly every turn. After Brown learned the girl's mother, Sarah Key-Marer, was pregnant with Lauren, he first wanted her to have an abortion and then sought a paternity test that eventually proved he was the father, Hum said.

"Does he show any interest in the child he fathered?" Hum asked. "Absolutely not."

Only when he was forced to pay child support did Brown finally see his daughter - about three years after she was born, Hum said, adding that the total number of hours Brown spent with his daughter during her life amounted to about two weeks.

Hum argued that Brown and Lauren went out to the cliff where nobody could see them, and he "hurled" her into the Pacific Ocean.

"This man picked up Lauren, whom he fathered but was never a father to, and threw her off a cliff into the water below," Hum said.

Brown, wearing a dark suit and a red tie, stared at Hum during his opening statement and showed no reaction.

Harris gave a different account of his client's relationship with his daughter, insisting the case was nothing more than "character assassination." He dismissed the prosecution's contention that it was a "good-versus-evil" struggle between Brown and Key-Marer.

"It was two parents trying to work out arrangements so they could have a happy child," Harris said.

Harris said Brown carried a picture of Lauren in his wallet, gave her gifts and toasted with his friends when he learned he would get visitation rights. Two weeks before her death, Brown filed court documents seeking more visits with Lauren, Harris said.

The prosecution's first witness was Key-Marer, a British immigrant, who described her relationship with Brown as amicable but deteriorated during the child custody dispute after she said in court documents that he was showing little interest in Lauren's life.

Key-Marer testified that her daughter wouldn't share what she did with Brown and said on the day she died, the child was upset once she learned Brown would pick her up at school.

"She said, 'No, no I don't want to see him today,'" Key-Marer said. "She was crying and I had trouble getting her out of the car seat."

In a wrenching moment, Key-Marer said after talking to her daughter on the phone she decided to leave work early and pick up Lauren. But she soon learned that Brown had arrived early and she wouldn't be able to get there in time.

She described waiting for Lauren that night, looking out her window for her daughter and Brown to return. Distraught, she and her husband decided to notify authorities because they thought Brown may have kidnapped Lauren.

"We knew something really bad had happened," she said.

Key-Marer broke into tears when she recounted how a female police detective told her that her daughter had died.

"I remember hearing the words 'cliff' and 'Lauren was dead,'" Key-Marer said before court recessed for the day. "I just couldn't believe it."

Brown was tried three years ago, but a mistrial was declared after a jury deadlocked on the severity of the crime. Some jurors favored a first-degree murder conviction, while others voted for second-degree murder or manslaughter.

Both sides intend to call experts to give their opinions on how Lauren died. Jurors will also take a trip to the cliff to see where the alleged crime occurred.