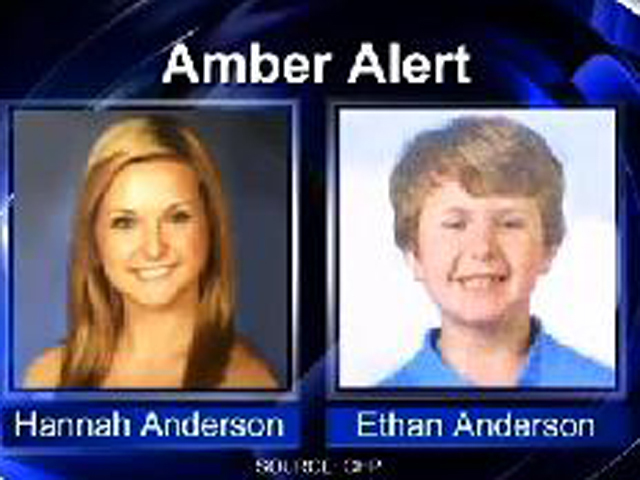 (CBS/AP) SAN DIEGO - The husband of a woman whose body was found in a burned house near the U.S.-Mexico border pleaded Tuesday with his friend who is suspected of killing his wife and abducting one or both of their children to turn himself in.

"Jim, I can't fathom what you were thinking," said Brett Anderson, at a news conference addressing his friend James Lee DiMaggio, the subject of a growing manhunt. "The damage is done."

Anderson also pleaded with his missing daughter, 16-year-old Hannah Anderson, who authorities said was in grave danger, to run away from DiMaggio if she got the chance.

Anderson did not make reference to his 8-year-old son Ethan, who was also missing.

The remains of a child were found in the burned house with the children's mother, 42-year-old Christina Anderson.

An autopsy was performed Tuesday, but authorities said it could still take a few days for DNA testing to determine if the child was Ethan.

"It is a possibility that it's Ethan," Sheriff's Lt. Glenn Giannantonio said. "Right now we just don't know. And we're praying that it isn't Ethan."

"From what I've heard, [Ethan and Hannah] considered him an uncle," the lieutenant told reporters.

A friend of Hannah Anderson said Wednesday that DiMaggio had told Hannah he had a crush on her. Marissa Chavez said she saw DiMaggio tell the teen a couple of months ago he didn't want the girls to think he was weird, but if the 16-year-old were his age he'd want to date her.

Sheriff's officials referred to Brett Anderson, who arrived from out of town to talk to investigators Tuesday, as Christina's ex-husband, but he told The Associated Press that the couple had still been married.

On Sunday night, authorities found Christina Anderson's body near a dead dog when they extinguished flames at the rural home of DiMaggio in Boulevard, a remote hamlet 65 miles east of San Diego.

The child's body was found later as they sifted through rubble.

An Amber Alert advised freeway motorists, television viewers and mobile phone subscribers about a blue Nissan Versa with California license plates that DiMaggio was believed to be driving. The California Highway Patrol said the suspect could be headed to Texas or Canada.

The FBI joined the search and the Amber Alert was later extended to Mexico's Baja California state, which borders Boulevard.

Monday marked the first time that mobile phone users were notified of a statewide Amber Alert in California through their phones, CHP spokeswoman Jamie Coffee said. The alert system, which was introduced in December, sends messages automatically, based on the phone's location, not the phone number.

Christina Anderson grew up with her mother and stepfather in the east San Diego suburb of Santee, and she aspired to a career in child psychology, said her ex-husband, James Chatfield of La Grande, Ore. The marriage lasted four years, until 1992, and Chatfield said he lost touch.

"She was a high school sweetheart," he said. "It was a marriage of convenience that just didn't work out."

Chatfield said he helped Anderson's current husband move to The Dalles, Ore., in the early 1990s, but they lost contact.