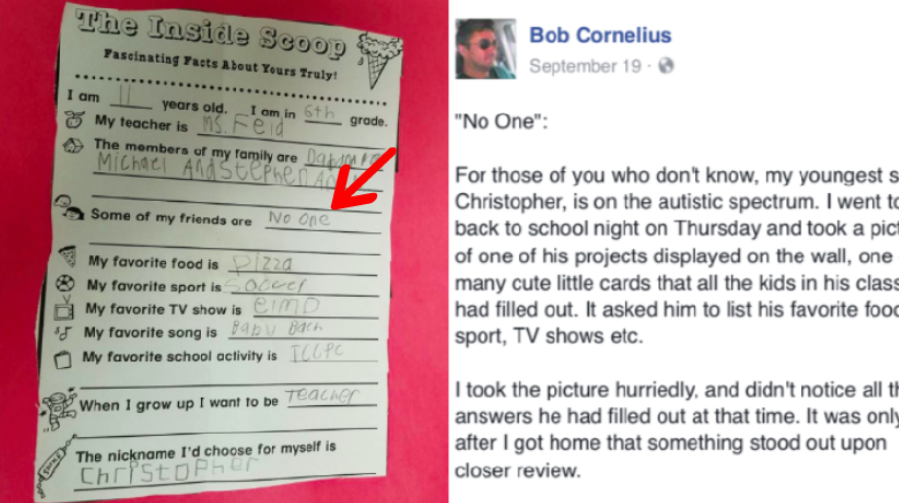 On a sheet of paper, the sixth-grade students were asked to list their favorite food, TV show, what they want to be when they grow up, among other things.

He grinned as he read some of his son’s responses.

But when he got home, he took a closer at a photo he snapped of the project, and he noticed something heartbreaking.

When his son, Christopher, was asked to fill out who some of his friends are, the boy wrote, “No one.”

Cornelius knew he couldn’t stay silent. So, the father took to Facebook, to send a message about his youngest child, who is on the autism spectrum.

“As far as I know, (save for one time), Christopher’s classmates have never been overtly cruel to him,” he wrote in a post that has now gone viral with more than 11,000 shares. “What they have done, however, is to exclude him.”

The New Jersey dad is a social worker, who works with parents -- like himself -- who have children with special needs. He’s constantly giving advice.

“The irony is -- I didn’t have a solution for myself,” Cornelius told CBS News.

That’s why the dad turned to Facebook to vent his frustration, and open up an important conversation that parents need to be a part of.

“It has to start at home,” Cornelius said. “Us parents need to teach our kids.”

Christopher just started middle school this year, and he has to learn adapt to a new school. Cornelius just wished his son would find a friend -- anyone, really.

His son, who isn’t too verbal, has a hard time expressing himself.

“He can’t talk about his feelings or anything too superficial,” Cornelius said.

But Christopher knows when he’s not being included, and Cornelius knows it bothers him.

“One thing I have learned from my son, from special needs kids, is that they understand a heck of a lot more than we give them credit for,” Cornelius said.

On Monday, Cornelius sat down with Christopher’s teacher to discuss his son’s predicament. School officials suggested joining an after school club.

Maybe that will work -- or maybe it won’t.

At the end of the day it comes down to empathy, Cornelius told parents.

“The only solution I can come up with is to share this with you and ask that you have a conversation with your kids,” he pleaded in his Facebook post. “Please tell them that children with special needs understand far more than we give them credit for. They notice when others exclude them. They notice when they are teased behind their back (a lot of times “behind their back” is right in front of them because they think the ‘different’ child doesn’t understand). But mostly they are very much in tune when they are treated differently from everyone else.”