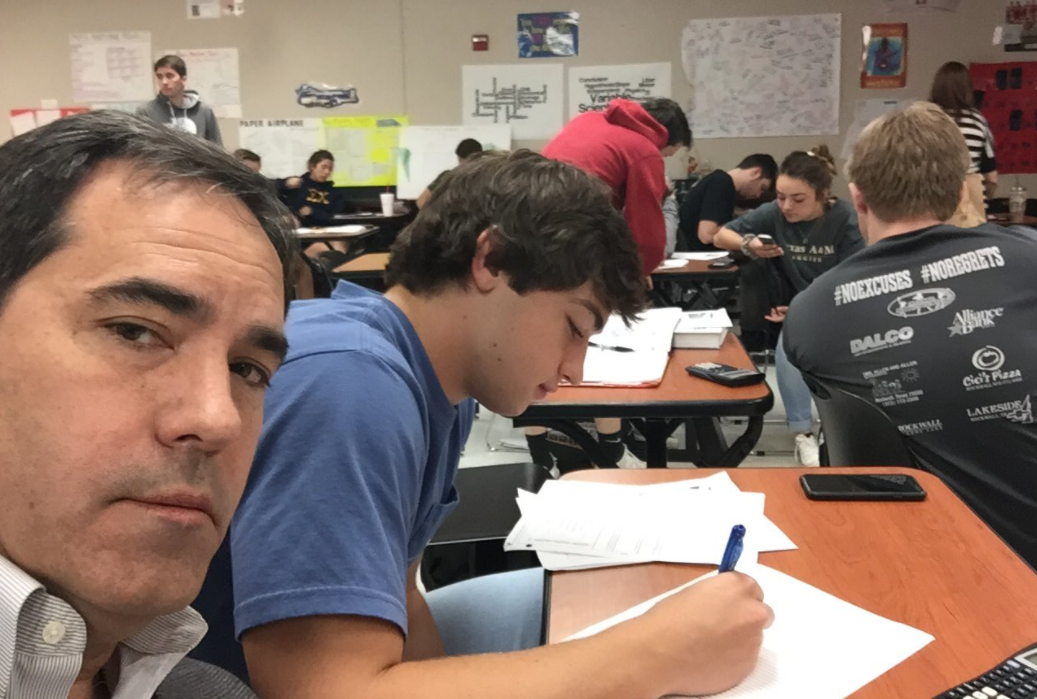 When Brad Howard received an email from his 17-year-old son's physics teacher about the high school junior's disruptive behavior in class, he decided to sit him down and have a talk.

"If I get another call from her, I'm going to come up there to your school and sit with you in class," Howard warned his son, Bradley.

The teenager behaved for a couple months without complaint. But two weeks ago, Howard's wife, Denise, told her husband there was another incident.

"You need to go up there and make good on your promise," said Denise, waking Brad up early on a Friday morning. "You have to go to school today."

Friday was his only day off, but Howard called Rockwall-Heath High School in Heath, Texas, as well as Bradley's teacher, to ask for permission to sit-in on the class. They agreed.

Howard got to the class early and took a seat at Bradley's desk. He watched as his son walked into the classroom, laughing and greeting his friends.

Then the teen heard a familiar voice from behind, "Hello, Bradley."

He turned around, and sure enough, his dad was sitting in his chair with his arms folded.

"He was pretty shocked. I think the whole class was a little intimidated at first," Howard told CBS News. "But he put two and two together."

About 40 minutes into the class, Howard snapped a picture to send to his wife, proving he followed through on his promise. She then forwarded the photo in a family group text to show their other children the consequences of bad behavior in school.

"My son is very kind hearted, but he's very talkative," Howard explained. "He loves to be the life of the party —  loves to get a laugh. He's 'Mr. Personality.'"

Brad's sister, Molli, poked fun at her younger brother on Twitter, posting her dad's very serious selfie from inside the high school classroom.

"My dad told my brother if he got another call from the physics teacher complaining he would go sit in his class..dad got another call," she wrote in a tweet that has gone viral with nearly 2,000 retweets.

While thousands online may have gotten a kick out of the dad's unusual parenting style, Howard said his son took the punishment very seriously.

"Sitting there, he realized that his actions caused a great inconvenience to me," Howard said. "I probably wouldn't do that again, but it's helped Bradley. He's been doing good in that classroom ever since."