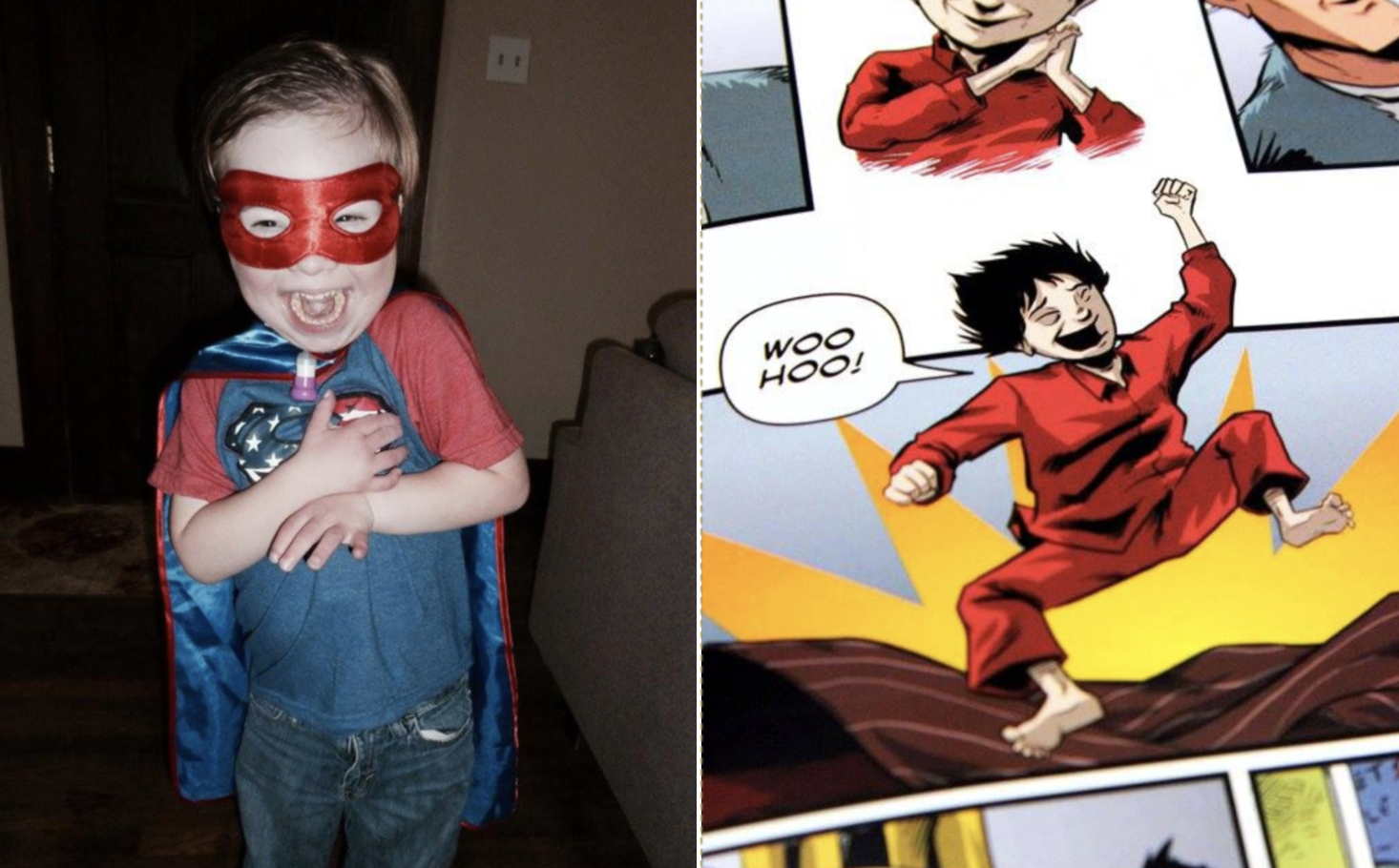 Chip Reece was flipping through pages of comic books in his collection when he realized something was missing: a character with Down syndrome.

When Reece found out his son would have the genetic condition, the comic book enthusiast searched for characters his child could connect with some day.

"I looked and I looked," Reece told CBS News. "I couldn't find anything."

His son, Ollie, was born in June 2010. He spent the first seven months of his life undergoing surgeries for two congenital heart defects.

As the dad from Wichita, Kansas, watched his little boy continue to fight, he couldn't help but think back on famous Marvel superheroes. He was disappointed a character like Ollie didn't exist.

"There's Iron Man with heart issues. That's his whole story," Reece said. "But I wanted a character my son could physically see as himself. Facial features are a big thing."

So he started to put his own comic book together — something small, just for family and friends. With help from illustrator Kelly Williams, Reece was able to see his ideas come to life on paper. Together, they created "Metaphase."

It was a 10-page graphic novel about a superhero father and his son.

In the book, Ollie, a boy with Down syndrome, wants to have powers just like his superhero dad. But due to the boy's heart defects, his concerned father tries to hold his son back. That's when Meta-Makers, a company run by an egomaniac, promises to give Ollie super powers, and the boy has to make a tough decision.

"As a kid it's the thing you dream about — being a superhero," Reece said. "I wanted my son to think that he, too, could dream just as big as I dreamed when I was little kid."

Shortly after Reece, a social worker who occasionally writes comic book reviews, showed the short story off to friends in town, he was contacted by Alterna Comics. The publishing company asked if he could flesh out the story.

Reece agreed, but he wasn't sure if he could afford the whole process. In 2014, he started a KickStarter campaign and raised more than $9,600 to help publish the book. In the summer of 2015, the book was released on Amazon and hundreds of copies were printed.

"I didn't have any real expectations," Reece said. But it got a warm reception.

Almost all of the 1,500 copies that have been printed have been sold. The book even made it into the local library and Ollie's school.

"He's had kids come up to him at school yelling, 'It's the superhero kid!' It's pretty cool. I love that it has given people a reason to approach him," Reece said.

Over the weekend, the father-son duo showed off the book at The Air Capital Comic Con in Wichita, and their story once again spread through the community.

Reece said this is the first year that 7-year-old Ollie, who is non-verbal, reacted to the book.

"He pointed at the book and the character then pointed to himself," Reece said. "He's finally realizing that it's for him."

Now the proud dad is thinking about the sequel, which he hopes to start working on full-time this summer. Ollie, who is now a second-grader, has grown up a lot since Reece first created the book.

"He's a very happy kid. He's funny. He can't say things, but I can tell. He is a prankster, which might be because of me," Reece said.

Reece plans to incorporate Ollie's "big personality" into the character.

"I have a lot of ideas and things will change," Reece said. "I'm excited to bring even more of him into the book."