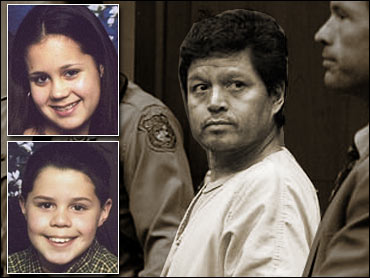 A man accused of killing his two children and burying them in the Midwest last summer apparently killed himself in his jail cell, the state attorney general said Thursday.

Gehring, who was in a child-custody dispute with his ex-wife, was arrested in California a week after their children — Sarah, 14, and Philip, 11 — disappeared after a Fourth of July fireworks show in Concord last year.

Authorities believe he shot them in southern New Hampshire, began driving west, bought a shovel in western Pennsylvania and buried the children in the Midwest within 10 miles of Interstate 80. The bodies have not been found.

Gehring's death makes the search "problematic, but it doesn't eliminate our hopes" of finding the bodies, Heed said.

Defense attorney Barbara Keshen said Gehring "suffered from a deep and undiagnosed major depression for most of his life.

"That illness distorted his judgment and led him to unimaginable acts, including likely taking the lives of his children and his own life," she said.

Keshen said Gehring, whom she hadn't seen for about a month, was not on suicide watch. She said another defense lawyer, Jackie Colburn, had spoken with him recently by phone about a routine matter.

Gehring pleaded innocent to murder charges in August. Trial was set for Sept. 7.

In November, Gehring told a newspaper that the FBI coerced a confession from him and that he would continue to plead innocent. His lawyers had suggested they would pursue an insanity defense.

But, when asked if he knew where his children were, Gehring told the Union Leader, "I prefer not to answer that."

After his arrest, Gehring spent a week in the Midwest with the FBI and police, presumably helping them try to find the children, before he was returned to New Hampshire.

Police have said that Gehring was despondent and emotional in his first police interview in California and said his life was over. He also had just lost a long-term job and was working as temporary.

Teresa Knight told police her ex-husband had physically abused her and that she was concerned for the children, according to a court document.