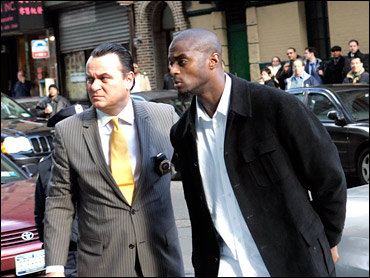 Robert Morgenthau told the newspaper that Burress, who shot himself with an unlicensed gun in November, was willing to agree to spend a year in jail, but prosecutors insisted on two, the Post said.

"We've always taken the position that he's going to have to go to jail, whether by trial or by plea," Morgenthau told the Post for a story in Monday's edition.

Burress shot himself in the thigh at a nightclub early on the morning of Nov. 29. He was charged with criminal possession of a weapon and faces up to 3½ years in prison. Burress has pleaded not guilty and is free on $100,000 bail.

His attorney, Benjamin Brafman, told the Post he was "bitterly disappointed."

"Now that they have drawn a line in the sand, this is going to be a battle," Brafman said.

Burress, who caught the go-ahead touchdown in the final minute for New York in the 2008 Super Bowl, also could face disciplinary action by NFL commissioner Roger Goodell under the league's personal conduct policy.