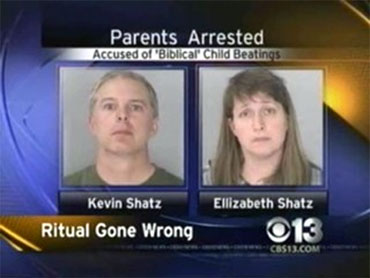 (CBS/KOVR)
CHICO, Calif. (CBS/KOVR) Three years ago, Kevin Schatz and his wife Elizabeth did something so noble, a local television station featured them; the pair decided to adopt three children from Liberia. Now, they're accused of killing one of the children because she mispronounced a word.

Apparently, they got the idea from a fundamentalist Christian group, which promotes this as a way of training children to be obedient.

Butte County District Attorney Mike Ramsey says for several hours the 7-year-old was held down by Elizabeth and beaten dozens of times by Kevin on the back of her body which caused massive tissue damage.

"It was torture," says Ramsey.

Another 11-year-old adopted child was allegedly critically beaten for "being a liar and a bad influence on the 7-year-old."

The District Attorney points to a book written by a Tennessee evangelist named Michael Pearl, who the Schatz's have told police they were following.

Pearl's website, nogreaterjoy.org, suggests "A swift whack with the plastic tubing would sting but not bruise. Give ten licks at a time, more if the child resists."

"This is not a good ole' fashion spanking, it certainly is way beyond that," says Ramsey.

The alleged beating happened on a piece of property in Paradise, Calif., where the three adopted children and the Schatz's six biological children were homeschooled. Paradise is 90 miles north of Sacramento.

The family rarely left, and they even grew their own food there.

If convicted, Kevin and Elizabeth Schatz face life in prison.