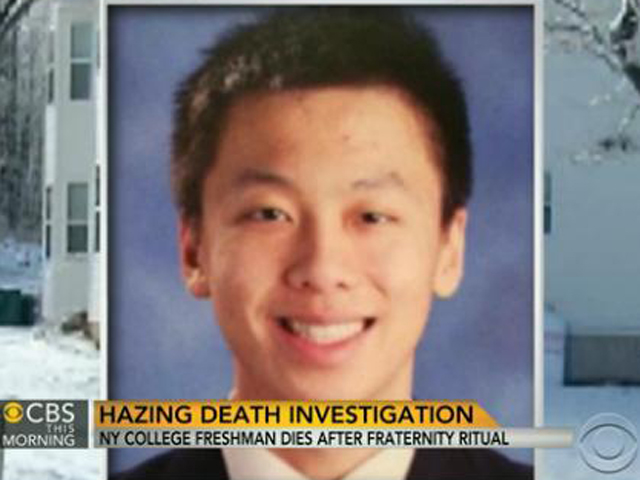 NEW YORK - Criminal charges will be filed in the death of a New York City college student who was forced to run a gauntlet while carrying heavy weight on his back during a fraternity ritual, a northeastern Pennsylvania prosecutor said Thursday.

Monroe County District Attorney David Christine said he won't decide on which charges to file, or against whom, until a police probe into the death of 19-year-old Chun "Michael" Deng is completed.

"Police are still going through the connect-the-dot phases of this investigation," Christine said.

The Baruch College freshman died Monday, one day after friends brought him to the hospital unconscious and in critical condition with major brain trauma.

About 30 members of the Pi Delta Psi fraternity had spent the weekend at a rented house in Tunkhannock Township, in the Pocono Mountains about 100 miles west of New York, according to a statement on the DA's website. Deng was one of four pledges.

At some point early Sunday, Deng ran a gauntlet blindfolded and with a heavy weight on his back, Christine said, in a ritual that fraternity members apparently called” Glass Ceiling”. He was knocked unconscious and carried inside the house. This is where he remained for some time before fraternity members drove him to an emergency room in Wilkes-Barre, about 30 miles away, the statement on the website said.

Police are trying to determine the lag time between the injury and Deng's arrival at the hospital, Christine said.

Baruch College has said it had no knowledge about the event.

Other Baruch students told CBS New York they didn’t know hazing was involved in the fraternity.

The Pi Delta Psi’s national executive president, Andy Meng, said the incident happened during “an unsanctioned event that was strictly prohibited by our organization,” according to the station.

Christine said it's not the first time that Pi Delta Psi has come to the Poconos.

"They've done this before, rented a place before in the Poconos," he said, calling it a "preplanned event where they rent a house, and plan a pledging ritual."

On Thursday, the school reportedly said all rights and privileges of the fraternity on Baruch’s campus have been suspended.