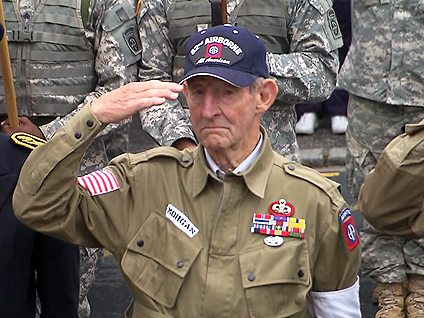 NORMANDY - As the anniversary of the D-Day invasion was marked again in Normandy, 89-year-old Fred "Ted" Morgan of Edgartown, Mass., returned to a bridge he hadn't seen since 1944.

"A shell hit just below where I was," Morgan says. "And buried me literally."

CBS News correspondent Anthony Mason reports Ted and Darrel "Pinky" Pinkston were medics with the 82nd Airborne. When they jumped that June 6th, their job was to secure the La Fiere bridge and keep the Germans from moving reinforcements to the beaches.

"The resistance was really horrible," Morgan says. "Because we were confronted with German tanks."

During the brutal battle, Morgan was caring for a wounded American soldier when a German tank came towards them

"He kept saying 'Get outta here Morgan, they're gonna kill us."

But, Morgan stayed with him. "No way I could have ever lived with myself if I left him in a ditch bleeding."

The German tank passed them by. That wounded soldier survived.

Morgan earned a Purple Heart and the Bronze Star in Normandy. He made four combat jumps in the War, which is even more remarkable when you consider this: Morgan was "afraid of heights" as a kid.

But he wanted to see action. So he signed up for jump school. A friend named Pete Vincent told him he'd never make it.

"I didn't sleep very much," Morgan says. "But that statement - I was going to show Pete Vincent above all that I could make it. And I did."

At home on Martha's Vineyard, Morgan still plays golf every day. He organizes the Fourth of July parade every year.

In Normandy, farmers showed Morgan and Pinkston a D-Day parachute and old plasma bottles used by American medics that had been found in the fields.

Fewer and fewer veterans survive who can tell the story of D-Day. Morgan, who turns 90 in September, knows he may not get chance to come back to Normandy. He's not sure why he waited until now to return.

Morgan says, "I needed to be here."

Here, the young Ted Morgan - who conquered his fear of heights - made his greatest jump of all. "Because it - it meant the world."