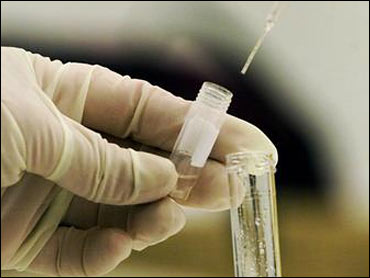 A million people will be vaccinated against the deadly scourge of smallpox under a plan President Bush will soon announce.

There are two things the White House and public health officials have to consider about smallpox, reports The Early Show medical correspondent Dr. Emily Senay. One is what to do before an attack; President Bush will outline that Friday. The other is what to do if an attack actually occurs.

Special rooms in the emergency department help contain airborne viral particles if a patient comes in with suspected smallpox. That person will get whisked into a negative pressure room to get an evaluation to determine if the disease is present.

If an attack does occur, hospitals will dispatch those staff already vaccinated against the deadly disease. "These are people who have to be doctors, nurses, laboratory technicians emergency room people epidemiologists infection control types," explains Dr. Martin Blaser of New York University Medical Center.

Some volunteers in this country have already been vaccinated as a part of clinical trials. I wanted to be vaccinated because I wanted to be able to help if something happens," says trial participant Carol Elliott.

The vaccine can cause potentially serious side effects. And because it's made from a live virus related to smallpox, a disease that is contagious and dangerous to those with immune deficiencies, care is needed following vaccination to avoid contaminating others.

"Were he to scratch that site and rub his eye, he would take that vaccine virus and potentially infect his own eye and lose his vision as a result of that," says Dr. Gregory Poland of the Mayo Clinic.

The program to be announced Friday calls for mandatory smallpox shots for 500,000 military personnel, starting next month. Vaccinations will also be recommended for about half a million civilian emergency workers. The public will have a voluntary plan in 2004, reports CBS News White House Correspondent Peter Maer.

In making the decision, Mr. Bush had to weigh the risks of the often-deadly disease against the dangers of the vaccine, which produces more serious side effects than any other vaccine dispensed in this country.

Federal health officials are preparing a massive public education campaign about both the disease and the vaccine. Health officials fear that many do not adequately understand the risks.

Smallpox, once among the most feared diseases on Earth, killed hundreds of millions of people in past centuries, but it hasn't been seen in this country since 1949 and was declared eradicated worldwide in 1980. But experts fear that it could be used by hostile nations or terrorist groups in an attack.

Routine smallpox vaccinations ended in the United States in 1972, meaning nearly half the population is without any protection from the virus. Health officials aren't sure whether those vaccinated decades ago are still protected.

Vaccinating people against the disease makes enemies less likely to use it, said Sen. Bill Frist, R-Tenn., who has been encouraging Mr. Bush to offer the vaccine widely.

A poll out this week found that 65 percent of people are willing to be vaccinated although it "may produce serious side effects in a small number of cases." That's up from 59 percent in May. Nearly six in 10 now say they are very or somewhat worried that terrorists will attack with smallpox, up from 43 percent in May.

Nonetheless, 60 Minutes II Correspondent Dan Rather reports that the risk of side effects has confronted the administration with a deadly dilemma: Do not vaccinate the population against small pox and leave millions of people vulnerable to one of the worst scourges known to man. Or treat people with a vaccine that is extremely effective at blocking the disease but can cause dangerous, sometimes fatal, reactions.

Smallpox shots involve a number of jabs with a needle containing some live virus. This triggers serious side effects in people with deficient immune systems or skin conditions, like eczema. People who are vaccinated can transmit the disease to others if the vaccinated area is left exposed, and this adds danger to any widespread vaccinations.

No one is certain how many people will be hurt by the vaccine. A 1969 study found that, out of every one million people vaccinated, 74 will suffer serious complications, and at least one will die

In an update of national smallpox policy in November, the CDC said limited ring vaccinations were the appropriate method for dealing with any outbreak. Ring vaccinations would be "more desirable than an indiscriminate mass vaccination campaign," said the CDC, because of the chances of people who should not get the vaccine getting it and the logistical difficulties involved.

For the civilian population, the president's plan closely tracks recommendations from the administration's top health officials.

Under the plan, the vaccine will be offered first to people most likely to encounter a highly contagious smallpox patient. That includes people who work in hospital emergency rooms, where sick patients might come for help, and those on special state teams that would investigate suspicious smallpox cases.

States submitted plans this week explaining how many people they plan to inoculate during this first stage. About half a million people will be covered by those strategies.

In a second stage, the shot would be offered to all other health care workers plus emergency responders such as police, fire and emergency medical technicians. That is likely to total roughly 10 million people.

Unlike civilians, shots would be compulsory for the military — a sensitive proposition, given that some troops rebelled at mandatory anthrax vaccines, which are much less dangerous.

Despite early concerns, the administration has now bought enough vaccine to cover everyone in the nation, although much of it has not yet been delivered.