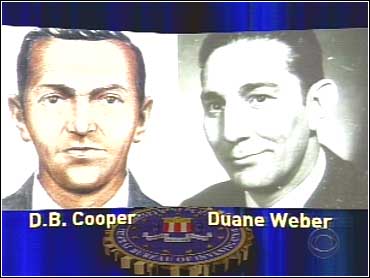 A Florida widow believes she may have solved one of the most mysterious crimes in U.S. history, the only successful hijacking of a plane in the United States, by looking into the past of her late husband.

As CBS News Correspondent Byron Pitts reports, Jo Weber now believes the man she married and knew as Duane Weber was in fact D.B. Cooper—the man who hijacked a 727 in 1971, demanded and got $200,000 and then parachuted out the back of the plane, never to be seen again.

Now 60, Jo Weber says she knows the slick looking, smooth talking insurance salesman she fell in love with lived a lie, and she claims, kept a legendary secret.

On November 24, 1971, a man wearing a black suit with a ticket in the name "Dan Cooper" boarded a Northwest Orient Airlines jet in Portland, Ore. carrying a note and a bomb.

After passing a note to a flight attendant that said, "Miss, I have a bomb," Cooper forced the plane to land at Seattle Tacoma Airport. There, he received his money, released the passengers, and ordered the light crew to take to the air again and fly south.

Hours later, at 10,000 feet in the air, somewhere over the Cascade Mountains in Washington state, the fugitive who came to be known as D.B. Cooper dove out the back end with a parachute and $200,000 in cash, and a manhunt and a legend were born.

After his exploits made the news, people wrote songs, books and a movie about him and sold T-shirts of his likeness—all in honor of the first and only man to get away with hijacking a U.S. plane.

But the manhunt never found any prey, leading local law enforcement to conclude Cooper "either got away or left a big hole in the ground."

Jo Weber believes he got away, and kept his daring crime and secret identity to himself, until the hour of his death.

Hospitalized in Florida with kidney disease, Duane Weber motioned to his wife to come close. After 17 years of marriage, there was something she needed to know.

Since her husband's death in 1995, Jo Weber started to piece together the clues dropped over the years: Jo recalled the sleep-talking nightmare Duane had about "leaving finger prints on a plane," an old knee injury he claimed he got from jumping out of a plane, the local library book on D.B. Cooper with Duane Weber's handwriting in the margins—the items she stumbled across during 17 years of marriage.

"I can't walk away from it," Jo says now. "Why would he have an old Northwest Airline ticket? Why would he take me to a place where eventually the money was found. Why all of this? There's too many pieces of the puzzle that fit."

It's a puzzle FBI agent Ralph Himmelsbach was assigned to 29 years ago. Now retired, he believes Jo Weber's story may have credibility.

He does fit the physical description," Himmelsbach said. "He does have the criminal background that I have always felt was associated with the case."

The FBI at one point had at least 900 suspects in the case.

A forensic artist who has worked with the FBI says the physical similarities between a composite sketch of Cooper and a younger Duane Weber are striking.

But in the end, Himmelsbach and most in law enforcement believe D.B. Cooper died of the injuries he surely suffered when he jumped out of the plane.

Jo Weber has a hard time believing that explanation.

"I have not seen one piece of evidence that supports that. No body. No bones. No...parachute. Nothing," she said. In fact, one of the only traces of the mysterious Cooper was $5,800 of the ransom money that a boy found in the Columbia River in 1980.

Whatever his fate, air travel has never been the same since the Cooper hijacking; now planes are equipped with a "Cooper Vane" that prevents the use of the rear stairway during flight.