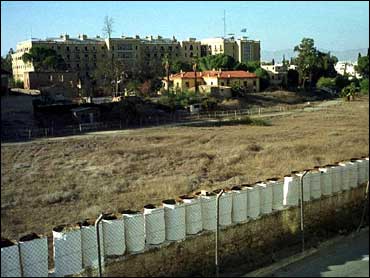 Hours after winning presidential elections, Cyprus' new leader said a proposed U.N. plan on reunifying the island must be changed before it can be accepted.

"It is our duty to continue the (U.N.) negotiations with flexibility and goodwill to bring about the improvements … necessary to change the Annan plan into a viable and lasting solution," Papadopoulos, 69, told thousands of cheering supporters Sunday.

Cyprus has been split since 1974 when Turkey invaded and occupied the north after an abortive coup by supporters of a union with Greece. The breakaway Turkish Cypriot state in the north is only recognized by Turkey, which maintains 40,000 troops there.

The United Nations set a deadline of Feb. 28 for the deal. If the deadline is not met, only the Greek-backed portion of Cyprus will be able to sign a EU accession agreement by April 16.

"We want to negotiate not in order to take away rights from our Turkish Cypriot compatriots, but in order to have a viable settlement respecting the rights of both communities," he said.

Papadopoulos said key issues will include the right of return of all Greek Cypriot refugees forced from the Turkish-occupied north of this Mediterranean island and for full respect of the European Convention of Human Rights.

Annan's plan envisages Cyprus' reunification as two separate Greek and Turkish Cypriot states linked through a weak central government. The plan would not give Greek Cypriots the right to return to the Turkish-controlled north.

Turkish Cypriot leader Rauf Denktash, who is backed by Ankara, opposes the plan. He wants Turkish Cyprus to be recognized diplomatically as a prelude to establishing the proposed federation.

Papadopoulos, a centrist backed by communists and other leftists, won the election with 51.55 percent of the vote. During his campaign, he criticized Clerides for conceding too much in the U.N.-sponsored reunification talks.

Clerides, 83, wanted a shortened third term to help steer the island through the reunification negotiations. He got 38.8 percent of the vote.

Papadopoulos officially becomes president March 1, but Clerides gave him the green light to deal with Cyprus' reunification negotiations before the Feb. 28 deadline, according to a statement released by outgoing president.

The president-elect asked Clerides to be an adviser in the U.N. negotiations.

Alvaro de Soto, Annan's special envoy for Cyprus, has warned that if the plan is not accepted by Feb. 28, "the opportunity (for a settlement) disappears until something happens, and that is totally uncertain."

If the deadline is not met, Cyprus will in theory be admitted to the EU as a whole, but under the internationally recognized Greek Cypriot government. The Turkish-occupied north will not form part of the union until a settlement is reached.