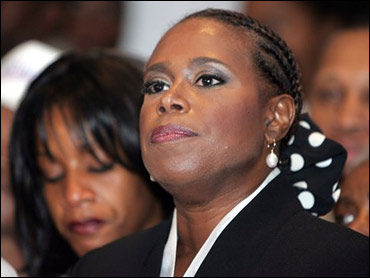 Cynthia McKinney, the fiery Georgia congresswoman known for her conspiracy theories about the Sept. 11 attacks and the scuffle she had earlier this year with a U.S. Capitol police officer, lost a runoff election Tuesday for her district's Democratic nomination.

Attorney Hank Johnson, a former county commissioner, won the nomination with 59 percent of the vote, surpassing McKinney by more than 11,000 votes. Johnson is likely to win in the fall in the heavily Democratic district.

After claiming victory, he told cheering supporters, "I'm going to make you proud."

In a bizarre concession speech early Wednesday morning, McKinney criticized the news media, claimed electronic voting machines were a threat to democracy and refused to congratulate Johnson by name.

"We aren't going to tolerate any more stolen elections," she said. "We're watching you and we want our leaders back or we will become the leaders."

McKinney, her state's first black congresswoman, has long been controversial. Her suggestion that the Bush administration had advance knowledge of the Sept. 11, 2001, terror attacks helped galvanize opposition and she lost her seat in 2002, but won it again two years ago.

In her latest brouhaha in March, she struck a Capitol police officer who did not recognize her and tried to stop her from entering a House office building.

A grand jury in Washington declined to indict her, but she was forced to apologize before the House. She drew 47 percent of the vote in last month's primary.

It was the second time in three election years that McKinney has been upset. After 10 years in Congress, she first lost in the 2002 primary to political newcomer Denise Majette, who vacated the seat two years later to run for the U.S. Senate. McKinney emerged from a crowded 2004 Democratic primary to easily reclaim the seat.

In other election results Tuesday: