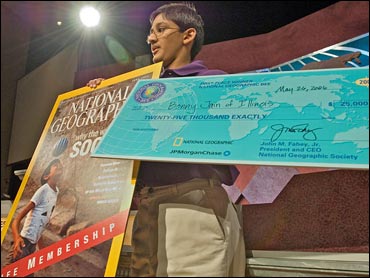 Move over Kansas. Step aside Oklahoma State. You, too, Oklahoma and Texas.

There's a new leader in Big 12 basketball, and it's Iowa State.

Marcus Fizer scored 29 points and Michael Nurse hit five 3-pointers as No. 17 Iowa State took sole possession of first place in the conference Saturday with a 72-61 victory over No. 10 Oklahoma State.

Picked to finish seventh in the league, Iowa State (24-4, 12-2 Big 12) needs just one victory in its last two games at Texas Tech and at Baylor to clinch at least a share of its first conference championship since winning the Big Six in 1945.

Oklahoma State (22-4, 11-3) fell back into a tie for second with Texas, but Iowa State coach Larry Eustachy wasn't ready to hoist the championship trophy just yet.

"We have to go on the road and sweep to be outright conference champions because the other two teams will not lose, believe me," Eustachy said. "I'm not turning cartwheels. I want our players to enjoy it tonight, but we have a very difficult task."

But the undersized, shorthanded Cyclones every starter played at least 36 minutes at least control their own fate. Not so for Oklahoma State.

"We'll have to get some help," Oklahoma State coach Eddie Sutton said. "I'm not sure Texas Tech and Baylor can beat this ball club. I'll be surprised if Iowa State gets beat."

Oklahoma State was leading the conference in scoring defense at 61 points a game. But Iowa State topped that figure with 847 to play and the Cowboys couldn't handle the combination of Fizer, Nurse and the crafty inside play of 6-foot-4 Stevie Johnson, who had 12 points and seven rebounds.

Johnson also was playing at home for the last time and it might have been the last appearance at Hilton Coliseum for Fizer, a junior who'll decide after the season if he'll return or enter the NBA draft.

Fizer made 13 of 19 shots, and he didn't just do it around the basket. While scoring 18 first-half points, Fizer made two 3-pointers, hit a pull-up 17-footer and made another jump shot with his toe on the 3-point arc.

He has scored 94 points in his last three games.

"Don't tell me that," Eustachy said. "That probably means he's going to be the third pick in the draft."

Iowa State also played outstanding defense on Oklahoma State's Desmond Mason, the Cowboys' leading scorer. Mason, guarded by Kantrail Horton, scored just eight points on 2-for-11 shooting. He had been averaging 18.6 and was coming off a 25-point game at Missouri.

"I knew it was going to be tough because he's a great player, strong, big, works hard," Horton said. "I knew coming into the game I was going to have a long night battling him, so I tried to devote all my energy to defense trying to stop him."

"We didn't execute like we wanted to in the first half," Adkins said. "They knocked down some shots and jumped out on us. I guess they caught us by surprise. They just played better than us."

Former Iowa State coach Johnny Orr was honored before the game and got the sellout crowd of 14,092 in a boisterous mood. It continued that way the rest of the afternoon.

Leading 37-31 at halftime, Iowa State began the second half with a 12-2 run that included two 3-pointers by Nurse and was in control from then on.

Tinsley's 3-pointer and Horton's two free throws gave Iowa State a 58-37 lead with 12:25 to play, and the Cyclones ran an effective four-corners offense down the stretch.

Iowa State led 72-53 with a little more than a minute remaining before Oklahoma State scored the final eight points.

"This season has been so magical," Fizer said. "It is hard to finally realize that this is the last home game of the season. I really wanted to go out there and do my best and do everything I can to help my team win."