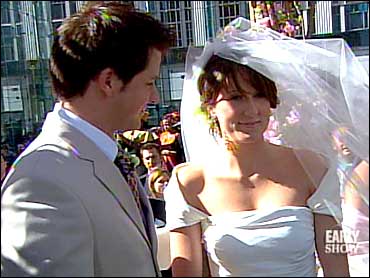 A restaurant busboy is accused of using the Internet and Forbes Magazine's list of the richest people in America in a scheme to steal millions from such figures as Steven Spielberg, Martha Stewart, Oprah Winfrey and Ted Turner.

As CBS News Correspondent Byron Pitts reports, police are calling it one of the most ambitious identify-theft schemes they have seen, a hi-tech scam of Hollywood proportions. They are still trying to trace the complex electronic trail to determine exactly how much was stolen, but fear it could be well into the millions.

"He's the best I ever faced," Detective Michael Fabozzi of the NYPD's Computer Investigation and Technology Unit told the New York Post, which first reported the story.

His father, Sharif Abdallah, denied his son did anything wrong.

Court papers say Abraham Abdallah had a dog-eared copy of last fall's Forbes "400 Richest" article, with notations of Social Security numbers, home addresses and birth dates of 200 chief executives, celebrities and tycoons. They say he also had more than 400 stolen credit card numbers — one belonging to a federal prosecutor.

Abdallah was charged with criminal impersonation, forgery and fraud. Bail was set at $1 million.

Investigators say that Abdallah used computers at a library, Web-enabled cell phones, virtual voicemail and hired couriers for the six-month scam, duping credit reporting companies such as Equifax into providing detailed credit reports on his victims.

Posing as his victims, he obtained social security numbers, credit card numbers and all vital financial records. With that, he contacted their banks and brokerage firms. Couriers and prostitutes all across New York City were used to deliver expensive items bought with the victims' credit cards and accounts at brokerage houses such as Goldman Sachs, Bear Stearns and Merrill Lynch.

Defense attorney Sam Gregory said Abdallah is innocent. Prosecutors "made an unfair leap from possession of this information to an inference that there was an attempt to take money," Gregory said.

The scheme started to unravel when Merrill Lynch executives got suspicious about an e-mail request to transfer $10 million from an account belonging to Thomas Siebel, founder of Siebel Systems, police said. Siebel said he never made the request, and Merrill Lynch contacted authorities.

Turner and Spielberg were unaware that their identities may have been stolen, representatives said. Representatives of Perot, Winfrey and Buffet would not comment. Stewart and Lucas did not immediately return messages.

Abdallah was arrested after detectives interceped a package meant for him that contained $25,000 worth of equipment used to manufacture credit cards, authorities said.

Detectives posing as employees of a courier service arranged a meeting for a delivery. Detectives dubbed it "Operation CEO" Abdallah tried to flee but was captured by a detective who leaped onto his car and climbed into the sunroof.

A high school dropout, Abraham Abdallah has already served prison time for bank fraud. Authorities said Abdallah was charged with credit-card and bank fraud when he was 18. His arrests include three in the U.S. by the FBI and a fourth in the Virgin Islands for trying to cash a phony $50,000 check. He spent several years in prison.

The crime he is accused of, experts in identity theft say, is becoming increasingly common.