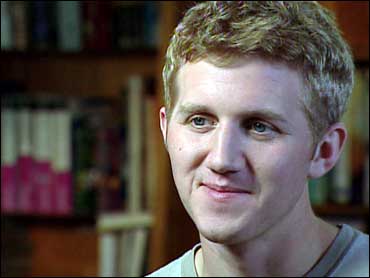 Worldwide sales of video game consoles and software are expected to reach $30 billion this year – that's more than twice the revenue of the NFL, the NBA, and Major League Baseball combined. With hundreds of millions of people playing worldwide, it was perhaps inevitable that sporting competition would develop and give rise to the professional video game player.

As 60 Minutes correspondent Steve Kroft reported earlier this year, the very best bill themselves as cyber-athletes, and crisscross the globe competing in tournaments that offer hundreds of thousands of dollars in prize money. The number one player is someone called "Fatal1ty." That's his screen name, anyway. His real name is Johnathan Wendel. Every new sport needs stars, and Fatal1ty is the first superstar of video games. If he didn't already exist, someone would have to invent him.


The best video game player in America lives in Kansas City, Missouri. When 60 Minutes showed up for the interview, Johnathan Wendel was in the family rec room, riveted to his computer screen. He was using a mouse and a keyboard to propel himself through a computer-generated landscape in search of ominous red demons to kill before they kill him. It's how he makes his living, and why he calls himself Fatal1ty. He was locked in a virtual death match with his opponents, oblivious to everything around him, including our arrival.

Wendel had been practicing a game called "Painkiller" day and night with his friends and sparring partners, one of whom was crashed out on the bed. They were trying to get ready for the next big tournament in Dallas.

Wendel has been a pro for six years. When we first interviewed him last summer, he said he had won over $300,000 in tournament prize money.

There are parents all over the country that are telling their kids, "Shut off the video game. You're wasting your time." Wendel says he got that, too.

At age 25, he has won 41 tournaments, playing the same shoot'em-up video games that you can buy in most stores and living a life most young men his age can only dream of. He has traveled, all-expenses paid, to every continent except Antarctica. He has played in Moscow's Red Square, and on the Great Wall of China. And everywhere he goes, he is besieged by fans.

When 60 Minutes first caught up with him, he had won world championships in four different video games, and was training to add a championship win in a fifth game.

He says nobody else has done that, "not even close."

Asked if he is the best in the world, he replies, "If you say so. I'm trying to be modest here but, yes. I'm pretty good."

If he hadn't discovered professional gaming he would probably be doing tech support for some computer company in Kansas City. He was only 18 at the time and still living at home.

What was his mother's reaction when he told her that he wanted to become a professional video game player?

"Oh that probably didn't go so well," Wendel says with a chuckle.

His parents were divorced, so having failed to persuade his mother, he moved in with his dad and went to work on him, offering him a deal: "I was like, 'Dad, just let me go to this one tournament. If I don't win any money, like any significant money, I'm going to quit. I'll just quit, I'll go full time school, no problem,'" Wendel remembers.

At the 2004 World Cyber Games championships in San Francisco, the purse totaled more than $400,000.

The tournaments are often broadcast live over the Internet, complete with play-by-play commentary.

There are both individual and team competitions, and coaches with furrowed brows pacing the sidelines.

It has the look and feel of a sporting event and to Johnathan Wendel, that's exactly what it is.

"It's all about hand-eye coordination, reflexes, timing, strategy, being quick on your feet, being able to think fast," Wendel says. "You got to be doing everything."

He may spend eight to 12 hours a day in front of a video screen, but don't mistake him for a geek.

Like most of the top video game professionals, he is an excellent athlete, and was a star on his high school tennis team.

"I work out a lot -- you know being physically fit and making sure your neurotransmitters are working properly and making sure that you're on beat and you're ready to go," says Wendel.

He calls that "neuro-fitness" and he believes it makes him think faster.

He also talks really fast. Are those his neurotransmitters?

He says competitive video gaming is like playing chess on caffeine. An exhibition he played against a local challenger in Sweden is a good example.

You have to strategically maneuver yourself though a three-dimensional maze, using the controls to collect weapons and ammunition while executing precision moves to evade, trap and corner your opponent before splattering him all over the dungeon – a detail some people find disconcerting.

Wendel spends hours each day trying to kill people in the virtual gaming world. Does he think that is a good thing?

"Well, I don't think it's a bad thing," he says. "I mean you're trying to get the point. Like, I mean, football. Why are you hitting the guy? That's not right. But people will pass it, because that's part of the game."

"I consider him an athlete because marksmanship is an Olympic sport, right? That's twitching the fingers as well," says Edward Castronova, a professor at Indiana University who studies and teaches the economics and sociology of video games.

"The average age of a video gamer is now 30. And you're getting to a point where the number of people who could pay money and spend time to watch is getting big enough to support a spectator sport," says Castronova.

Parents all over the country watch their children play video games and Kroft notes he doesn't think it's that exciting.

"Well, baseball's not exciting to somebody from France, either. It's the kind of thing you have to know what's going on inside the game to really appreciate why getting onto that ledge and getting that power up at the moment was just an awesome move that nobody's ever able to do. It's a skill that 30 years from now a lot of people will understand," says Castronova.

They already get it in South Korea. A video game tournament in the country's second largest city drew a crowd of 100,000 people last year, and regular matches draw big ratings on national television. The top Korean players make hundreds of thousands of dollars, date movie stars, and need bodyguards to protect them from their overenthusiastic fans.

And a lot of people are betting that it's only a matter of time before the same thing happens in the U.S., and that pro video gaming will eventually take off, like skateboarding and extreme sports did a decade ago. Because of the Internet, players from all over the world can meet and compete, and it's all happening in real time.

"Our reigning stereotype of video gamer is a 16-year-old kid who is alone in his basement. And that's not really true any more," says Castronova.

Does Castronova see it as social intercourse?

"Yeah, I see it as a very, very broad communication phenomenon. The parallel would be phones, radios, movies, TV," he says.

60 Minutes caught a glimpse of it in late 2004, when we followed Fatal1ty to the frozen hinterlands of Sweden to witness a digital version of Woodstock called a "LAN Party." Nearly 6,000 young people lugged their desktops through the snow to a convention center, where they hooked them up together and played video games for three days and three nights, with only occasional breaks for sleep.

What does Wendel think is the attraction?

It has become a huge subculture, comprised mostly of young men that spend more money on video games than they do on music or going to the movies.

It's a community of interest big enough to attract prize money, advertising revenue - and merchandising deals from companies peddling computers, video games, and soft drinks. All are desperate to sell gamers something - if they ever get up from their video games. And no one is better positioned to make a killing than Johnathan Wendel.

He has just launched his own brand of Fatal1ty products, including mouse pads, keyboards, and headsets, built specifically for video gaming – all done with the help of his marketing guru, Mark Walden.

Walden says Wendel is going to make millions of dollars.

"For the new millennium comes a new sportsman, the e-sportsman. So, he is the first cyber athlete, so to speak," says Walden. "You know, you look back 50 years from now and there had to be someone at the turn of the century that played baseball. There had to be a Babe Ruth and a Ty Cobb. There has to be a Johnathan "Fatal1ty" Wendel."

Walden thinks Wendel will be viewed as the Babe Ruth of the 21st century. "I think Johnathan will go down as the guy who, basically, brought gaming, as a sport, mainstream," he says.

Amidst all this hype, agents and promoters are already scouting the next generation of stars. No fledgling sport is complete without a prodigy, and in professional video gaming, that mantle has fallen to eight-year-old Victor De Leon III, a.k.a "Lil Poison."

Kroft played a round with "Lil Poison." How did he rate as an opponent?

"Lil Poison" is still too young to have a paper route, yet he has already won $2,000 playing in tournaments against adults, and he has signed an exclusive deal with Sundance DiGiovanni and Mike Sepso, who run Major League Gaming, which organizes tournaments and helps clients land endorsement deals.

But De Leon is young. "What is he going to endorse?" Kroft asks. "Happy Meals?"

"You know, there are crazier endorsers out there," DiGiovanni says. "You know, he represents something which a lot of people right now are trying to figure out how to grab hold of."

Last November in New York, Fatal1ty was trying to grab hold of another world championship, in a fifth game, "Painkiller." But this time, he entered the finals as the underdog against his chief nemesis and reigning champion in the game, a 20-year-old Dutchman known as "Vo0."

It was the culmination of a ten-city, $1 million world tour organized by the Cyberathlete Professional League. After falling behind early in the tournament, Fatal1ty mounted a valiant comeback.

With his back against the wall, he came up clutch. And all of that experience paid off.

The first prize was $150,000, the biggest check of Wendel's career, and a sum that should go a long way towards finally impressing his mother.

"You know what? I'm pretty sure they're impressed. But you know, the day I drive up in a Ferrari in front of the house, that's going to be the day that I'm going to say, 'I did it,'" says Wendel.