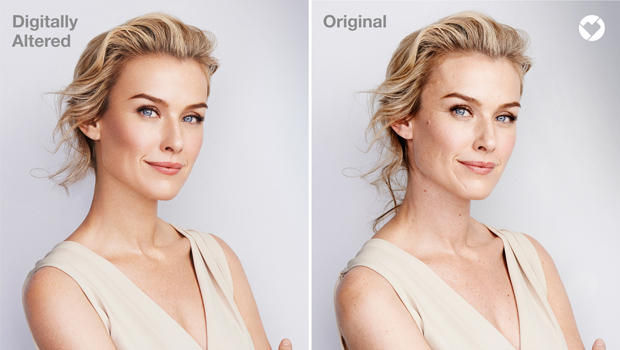 CVS Health is announcing a major change in how you shop for beauty products. The nation's leading drugstore chain will inform customers if certain advertisements for products were digitally altered. A special watermark will highlight imagery without material changes.

Those products include makeup and skincare items, where photos are edited to adjust a person's size, shape or skin color.

"A couple of statistics that really hit us is that 80 percent of women feel worse about themselves after looking at beauty ads, and 42 percent of girls in grades one through three want to be thinner," Foulkes said. "For us, as a big health care company, we felt this was a health issue. In fact, the American Medical Association has said that propagation of unrealistic body imagery is hurting our health."

CVS will append a "beauty mark" to imagery in its stores that has not been digitally altered.

"What we're committing to is, that any of the imagery you see in our stores will be real. We'll be honest with you and we'll give you a beauty mark that will say we didn't digitally alter it. And if we have certain partners who still want to have a digitally-altered photograph, we'll say it's been digitally altered.

"So women, as they're looking at photographs, will know what's real, and not feel that they have to live up to some unrealistic standard," Foulkes said.

She described a shift in what is attracting young women: "If you look at girls age 13 to 24, they're on YouTube, and the reason they're going to YouTube is they're saying, 'I see imagery there that's realistic.' I think if they can go to a store or a website that also reflects authenticity, they'll feel better about us, they'll trust us, and they'll do more business with us."

"Are you finding that young girls are not looking at models anymore for inspiration, that they looking at YouTube -- They look just like I do -- and that's the look they're going for, not the model look?" asked co-host Gayle King.

"Absolutely. They're saying, 'Celebrities aren't real. I want to relate to people who have my own imperfections and feel that I'm empowered by the fact I look like these people.' It's a huge opportunity. and it's what a lot of indie brands are doing so effectively and why they're growing. They're tapping into this empowerment among girls, and that's what we're hoping to fuel that with this conversation."

It's the latest move among several customer initiatives at CVS. The chain (which plans to buy the insurance giant Aetna) has also stopped the sale of tobacco products, and introduced limits on opioid prescriptions.

Foulkes described her company's efforts against the opioid crisis, beginning February 1, tying CVS' pharmacy benefits management (PBM) company and their retail business together. "The PBM will now have new rules in place, so if you're just leaving the dentist for minor surgery, for example, and getting an acute prescription, we'll only allow you to get a seven-day supply.

"And at our retail counters, we'll be educating consumers on the why. And the why around that is after seven days, the likelihood of addiction rises with every day's use of opioids. So we really want to make sure that if you only had something minor, you just get seven-days' supply, and we think that will make a big difference."