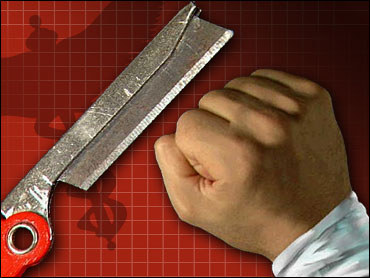 Cutting. It's a practice that is foreign, frightening, to parents. It is not a suicide attempt, though it may look and seem that way. Cutting is a form of self-injury — the person is literally making small cuts on his or her body, usually the arms and legs. It's difficult for many people to understand. But for children, cutting helps them control their emotional pain, psychologists say.

This practice has long existed in secrecy. Cuts can be easily hidden under long sleeves. But in recent years, movies and TV shows have drawn attention to it — prompting greater numbers of teens and tweens (ages 9 to 14) to try it.

"We can go to any school and ask, 'Do you know anyone who cuts?' Yeah, everybody knows someone," says Karen Conterio, author of the book, Bodily Harm. Twenty years ago, Conterio founded a treatment program for self-injurers called SAFE (Self Abuse Finally Ends) Alternatives at Linden Oak Hospital in Naperville, Ill., outside of Chicago.

Picture Of An Unhappy Kid

Her patients are getting younger and younger, Conterio tells WebMD. "Self-harm typically starts at about age 14. But in recent years we've been seeing kids as young as 11 or 12. As more and more kids become aware of it, more kids are trying it." She's also treated plenty of 30-year-olds, Conterio adds. "People keep doing it for years and years, and don't really know how to quit."

The problem is particularly common among girls. But boys do it, too. It is an accepted part of the "Goth" culture, says Wendy Lader, PhD, clinical director for SAFE Alternatives.

Being part of Goth culture may not necessarily mean a kid is unhappy.

Lader says "I think kids in the Goth movement are looking for something, some acceptance in an alternative culture. And self-injury is definitely a coping strategy for unhappy kids."

Very often, children who self-harm have an eating disorder. "They may have a history of sexual, physical, or verbal abuse," Lader adds. "Many are sensitive, perfectionists, overachievers. The self-injury begins as a defense against what's going on in their family, in their lives. They have failed in one area of their lives, so this is a way to get control."

Self-injury can also be a symptom for psychiatric problems like borderline personality disorder, anxiety disorder, bipolar disorder, schizophrenia, she says.

Yet many children who self-injure are simply "regular kids" going through the adolescent struggle for self-identity, Lader adds. They're experimenting. "I hate to call it a phase, because I don't want to minimize it. It's kind of like kids who start using drugs, doing dangerous things."

Psychiatrists believe that, for children with emotional problems, self-injury has an effect similar to cocaine and other drugs that release endorphins to create a feel-good feeling.

"Yet self-harm is different from taking drugs," Conterio explains. "Anybody can take drugs and feel good. With self-injury, if it works for you, that's an indication that an underlying issue needs be dealt with — possibly significant psychiatric issues. If you're a healthy person, you might try it, but you won't continue."

Self-harm may start with the breakup of a relationship, as an impulsive reaction. It may start simply out of curiosity. For many kids, it's the result of a repressive home environment, where negative emotions are swept under the carpet, where feelings aren't discussed. "A lot of families give the message that you don't express sadness," says Conterio.

It's a myth that this behavior is simply an attention-getter, adds Lader. "There's a [painkiller] effect that these kids get from self-harm. When they are in emotional pain, they literally won't feel that pain as much when they do this to themselves."

Over time, the cutting typically escalates — occurring more often, with more and more cuts each time, Rosen tells WebMD. "It takes less provocation for them to cut. It takes more cutting to get the same relief — much like drug addiction. And, for reasons I can't explain but have heard often enough, the more blood the better. Most of the cutting I see is quite superficial, and looks more like scratches than cuts. It's the sort that when you put pressure on it, it stops the bleeding."

What Parents Should Do

When parents suspect a problem, "they are at a loss of how to approach their child," Conterio says. "We tell parents it's better to err on the side of open communication. The kids may talk when they're ready. It's better to open up the door, let them know you're aware of this, and if they don't come to you, go to someone else ... that you're not going to punish them, that you're just concerned."

Be direct with your child, adds Lader. "Don't act out of anger or let yourself become hysterical — 'I'm going to watch you every second, you can't go anywhere.' Be direct, express concern. Say, 'We're going to get help for you.'"

Parents often mistake cutting for suicidal behavior. "That's usually when they have finally seen the cuts, and they don't know how to interpret it," explains Rosen. "So the kid gets dragged into the ER. But ER doctors aren't always used to seeing this, and find it difficult to understand whether it's suicidal or self-injurious behavior. Many kids who are not suicidal at all are being evaluated and even hospitalized as suicidal."

Unfortunately, "the attitude in hospital emergency rooms can be very cavalier and harsh about self-injurers," adds Lader. "There's a lot of dislike, because it's a self-made injury, so ER personnel can be very hostile. There are all kinds of stories of girls getting stitched without anesthetic. The thing is, after they've self-injured, the girls are calmer — so when they're getting stitches, they feel the pain. Yet the doctor is angry, wants to get this over with."

Psychotherapy should be the first step in treatment, Lader adds. The SAFE web site has a list of doctors who have been to her lectures, who want to work with self-injurers. With other therapists, ask if they have any expertise in working with self-injurers. "Some therapists have a fear reaction to it. The therapist needs to be comfortable with it," she advises.

However, the girl or boy must be ready for treatment, says Rosen.

"The ultimate lynch pin is, the child has to decide they're not going to do this anymore," he tells WebMD. "Any ultimatum, bribery, or putting them in a hospital is not going to do it. They need a good support system. They need treatment for underlying disorders like depression. They need to learn better coping mechanisms."

When An Inpatient Program Is Necessary

When kids just can't break the cycle through therapy, an inpatient program like SAFE Alternatives can help.

In their 30-day program, Lader and Conterio only treat patients who voluntarily request admission. "Anybody who can't perceive that they have a problem will be hard to treat," says Conterio. Those who come to us have recognized that they have a problem, that they need to stop. We tell them in the acceptance letter we send them, 'This is your first step toward empowering yourself.'"

When admitted to SAFE, patients sign a contract that they won't self-injure during that time. "We want to teach them to operate in the real world," says Lader. "That means making choices in response to emotional conflict — healthier choices, rather than just self-injuring to feel better. We want them to understand why they are angry, show them how to handle their anger."

Although self-harm is not allowed, "we don't take away razors," Conterio adds. "They can shave. We don't take belts or shoe laces. The message we're sending is, 'We believe you're capable of making better choices.'"

Many kids haven't thought about it at all — exactly why they self-injure, says Lader. "It's like any addiction, if I can take a pill or self-medicate in some way, why deal with the problem? We teach people that cutting only works in the short term, and that it will only get worse and worse."

When kids learn to face their problems, they will quit self-harming, she adds. "Our goal is to get them to communicate what's wrong. Babies don't have the capacity for language, so they use behavior. These adolescents regress to that preverbal state when they self-harm."

Individual and group therapy are the hubs of this treatment program. If there is underlying depression or anxiety, antidepressants may be prescribed. The patients also write regularly in their journals — to learn to explore and express their feelings.

"Many kids have difficulty dealing with situations and people that make them angry," Lader adds. "They don't have great role models for that. Saying no, standing up to people — they don't really believe they're allowed to do that, especially girls. But if you can't do that, it's very difficult to maneuver the world, survive in the world without someone stronger, more capable than you to fight your battles."

Circular negative thinking keeps kids from developing self-esteem. "We help them empower themselves, take risks in confrontation, change how they view themselves," says Conterio. "If you can't set limits on someone else's behavior, stand up to them — you can't like yourself. Once these girls learn to take care of themselves, stand up for what they want, they will like themselves better."

"We want them to get to the point where they believe, 'I am somebody, I do have a voice, I can make changes, instead of, 'I'm nobody,'" she says.

One study of the SAFE program showed that, two years after participating, 75 percent of patients had a decrease in symptoms of self-injury. An ongoing study is indicating a decrease in hospitalizations and emergency room visits.

"I've been doing this for 20 years, and the success rate is far greater than the failure rate," says Conterio. "We truly believe that if people can continue to make healthy choices, they won't go back to self-harm. We get e-mails that are a blast from the past. Some patients do extremely well. Others regress. Others have finally decided to do the work they learned here. When they apply it, they do well. It all goes back to choice."

The bottom line: "When kids decide they don't want to cut any more — and they get stressed again — they have to be able to manage stress as it arises," Rosen says. "They can't succumb to cutting. People who can figure out some alternative way to manage stress will eventually quit it."

Parents can help by providing emotional support, helping identify early warning signs, helping kids distract themselves, lowering the child's stress level, and providing supervision at critical times, Rosen says. "But a parent can't do it for them. It takes a certain level of resource to be able to stop cutting, and many kids don't have those resources. They need to stay in therapy until they get to that point."

Self-harm is not a problem that kids simply outgrow, Rosen adds. "Kids who develop this behavior have fewer resources for dealing with stress, fewer coping mechanisms. As they develop better ways of coping, as they get better at self-monitoring, it's easier to eventually give up this behavior. But it's much more complicated than something they will outgrow."