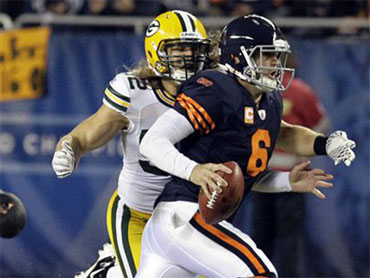 Jay Cutler threw for 221 yards, Brian Urlacher forced a key fumble and Chicago took advantage of a team-record 18 penalties by the Packers to beat Green Bay 20-17 on Monday night.

Robbie Gould won it with a 19-yard field goal with 4 seconds left. The Packers' James Jones lost a fumble on a hit by Urlacher in the final minutes. Then Morgan Burnett was called for pass interference on Earl Bennett, setting up the winning kick.

"It's fun, that is all you can ask for," Cutler said. "The defense did a great job, we struggled the whole game, felt like we kind of were killing ourselves."

The Bears kept insisting they were contenders through a sloppy preseason and less-than-inspiring opening win over Detroit. Since then, they turned heads with a win at Dallas last week, and stamped themselves as contenders by beating Green Bay - with lots of help from the Packers.

The Bears had tied it at 17 on a 25-yard field goal by Gould when Urlacher jarred the ball out of Jones' hands after the receiver caught a pass from Aaron Rodgers near midfield. Tim Jennings recovered, giving Chicago the ball on the Packers 46 with 2:18 remaining.

Soon after, another penalty cost the Packers in a big way.

On second down at the 33, Cutler tried to hit Bennett deep along the right sideline and Burnett basically hammered him, wiping out an interception by Nick Collins and putting the ball at the 9.

Three plays later, Chicago walked away with a wild win and the only undefeated record in the NFC.

"We didn't play our best game and won. That's got to be a good sign," coach Lovie Smith said.

As for the Packers?

"It was an uncharacteristic game on offense for us, well, just as a team," Rodgers said. "Way too many penalties."

Devin Hester delivered his first touchdown return in three years when he ran back a punt 62 yards in the fourth quarter, giving the Bears a short-lived 14-10 lead.

Rodgers threw for 316 yards and a touchdown and also scored on a 3-yard run that gave the Packers a 17-14 lead in the fourth period. Jermichael Finley had nine catches for 115 yards, but the sloppiness simply caught up with the Packers in the end.

Cutler completed 16 of 27 passes with a touchdown and interception. Johnny Knox had four catches for 94 yards.

Chicago held its longtime rival to 63 yards rushing, but the Bears had only 77 themselves. That turned it into an air game for much of the night.

Hester had just put the Bears ahead by four in the opening seconds of the fourth quarter when the Packers responded with a 62-yard touchdown drive.

A roughing-the-passer penalty on Henry Melton gave them a first down at the 3. Rodgers, who cramped up a few plays earlier, rolled to his right and lunged into the end zone, making it 17-14.

Then the Packers basically gave it away.

Frank Zombo got called for a helmet-on-helmet hit against Cutler on the next drive that erased an interception by Nick Barnett. On second down, Collins got called for a late hit on Matt Forte after a 15-yard reception, putting the ball on the Packers 29.

Hester's return eased the sting after the Bears again were stopped at the goal line for the second time this season when choosing not to go for the field goal. It happened late in the third quarter after Julius Peppers blocked Mason Crosby's 37-yard field goal.

The Bears took over on the 18 and marched to the Packers 1, only to come up short again. Cutler fired a 5-yard pass to a kneeling Bennett between defenders on third down, and the officials ruled Tramon Williams touched Bennett before he leaned over the goal line.

So coach Lovie Smith had to decide to kick the tying field goal or go for the touchdown.

Just as he did in the opener, he went for the end zone. This time, Desmond Clark dropped a potential TD pass and Chicago came away empty-handed.

Hester, however, showed his old explosiveness. He took a punt at the 38, broke up the right sideline and didn't stop until he reached the end zone in a familiar scene, albeit one that hadn't played in a while. It was 12th time he's returned a kickoff or punt for a touchdown and the first since Dec. 30, 2007.

"We've been waiting for Devin to come back and he was back tonight," Smith said. "Of course it was outstanding on that one touchdown run, but even before that it just felt like every time he went back there he had a chance to score."

The Bears wore throwback 1940s jerseys to honor the Monsters of the Midway. They also honored George Blanda, who died Monday, with a moment of silence before the game.

And they made a surprising move, holding out defensive tackle Tommie Harris for reasons that were not immediately clear.

A three-time Pro Bowl pick, Harris was benched for a game last season and suspended for one in 2008 because of detrimental conduct. He has also been limited by knee and hamstring injuries over the past four years, although he was not listed on the Bears' injury report leading up to Monday's game.

He has insisted he is healthy, but he is also off to a slow start.