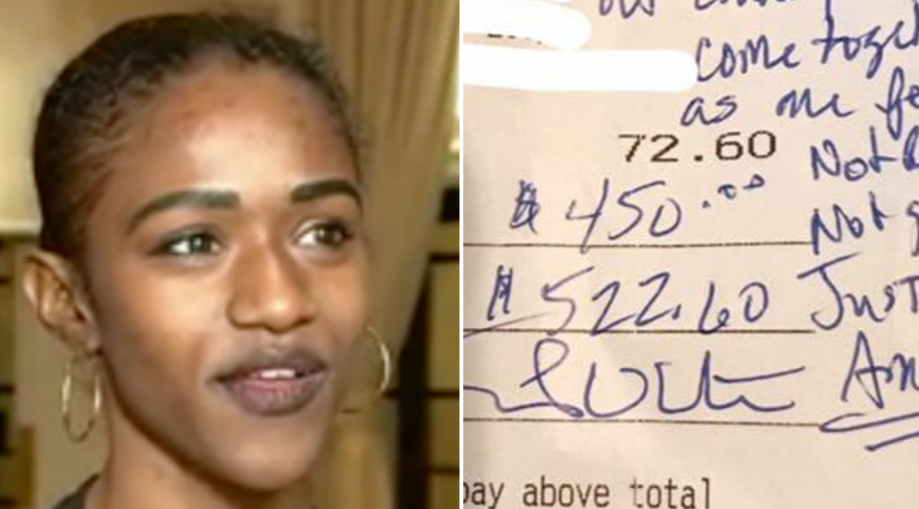 After scrambling to serve an unusually large crowd over the weekend — as thousands flooded Washington, D.C. for President Donald Trump’s inauguration and the Women’s March on Washington — Rosalynd Harris was ready to return to business as usual on Monday.

Harris, a waitress at Washington’s Busboys & Poets, expected to get a few stragglers from the weekend, and sure enough, she got them.

When she spotted a group of three men walking into the restaurant together, she could make some assumptions.

“I could tell they were from the south because they had their cowboy hats on, and I was like, ‘Oh, you’re not from the city,’” Harris told CBS affiliate WUSA-TV, describing the restaurant as having a “liberal, Democratic kind of feel.”

The three men, who turned out to be Republicans from West Texas, were in town for the inauguration. They smiled as they took a seat at an empty table. Harris, handing them each menus, flashed a smile right back. At that point, Harris had no idea within the span of an hour, one of those customers would give her the surprise of a lifetime.

The polite waitress didn’t treat the men differently than any other customer she had. So, imagine her surprise when she cleared their table to find this thoughtful message scribbled in blue ink along the side of the check: “We may come from different cultures and may disagree on certain issues but if everyone would share this smile and kindness like your beautiful smile our country will come together as one people. Not race. Not gender. Just American. God Bless.”

Harris’ jaw dropped as she spotted the $450 tip at the bottom of the $70 receipt.

Harris, who juggles waitressing shifts with her other work as a freelance dancer and creative director, certainly appreciated the extra money to help pay her bills. But, even more, she says, she appreciated the message.

“Never judge a book by its cover and always be open with people to experience something miraculous like that,” Harris told WUSA-TV. “We may have different opinions and disagree on different issues, but the fact that he still looked at me as an equal and someone of value, it said something, like OK, not all hope is lost.”

On Wednesday, The Washington Post identified the generous tipper as 37-year-old Jason White, who said he didn’t even tell his friends about the kind act. His only concern at the time: spreading a message of unity.

“We have to think about being better Americans, we have to look into ourselves and how we treat one another,” White told The Washington Post. “If everyone did a little something to show respect…we can love one another.”