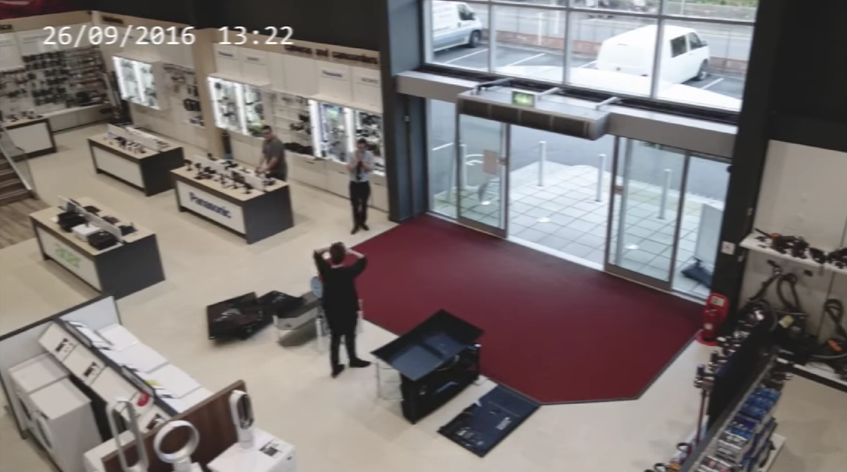 It’s one of those moments that’s so painful to watch, you don’t want to look – but at the same time, you can’t look away.

Electronics store HBH Woolacotts in St. Austell, England, dubbed it a “customer fail,” and they’re sharing it with the world in a YouTube video that has been viewed more than 2.8 million times.

In the store surveillance video, a man can be seen walking over to a display of flat-screen TVs. He squats down to takes a closer look at one of the models, and seconds later chaos ensues.

While examining the TV, the man accidentally bumps into it, tipping it over like a domino onto the TV inconveniently placed behind it, which collapses as well.

The scene looks like a giant game of Jenga. But that’s just the half of it.

Startled by what just happened, the man steps back and bumps into another TV behind him – and again, it collapses onto the one just beyond.

Looking at the pile of broken TVs – worth more than $6,000 – the man slowly backs away with both hands on his head.

In the meantime, a shocked HBH Woolacotts employee steps forward and together they start picking up the pieces.

It’s unclear whether or not the man has to pay for the damage, but at least the store seems to be making light of the situation.

“If you think you’re having a bad day, spare a thought for this poor customer at our St. Austell store, who managed to damage over £5000 worth of TVs, including a curved 55” OLED! Ouch!” the store posted on Facebook.