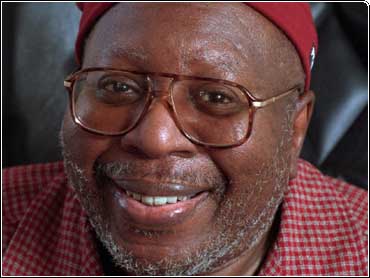 Famed rhythm and blues singer-songwriter and chart-topping composer Curtis Mayfield -- whose socially-conscious hits People Get Ready, Keep On Pushing, We're a Winner, and This Is My Country, became what some called the soundtrack to the civil rights movement -- has died. He was 57.

Mayfield died Sunday morning at the North Fulton Regional Hospital in Roswell, Ga., a nurse said. No details were given at the request of his family.

Mayfield was too ill to attend a March ceremony that inducted him into the Rock and Roll Hall of Fame. He became a Grammy Legend Award winner in 1994 and a Grammy Lifetime Achievement Award winner the next year.

Of the mantle given him of providing the musical backdrop for the 1960s, Mayfield said in 1996: "I'm very pleased they said that."

Longtime manager and business partner Marv Heiman said Mayfield knew he was leaving behind a legacy that not only entertained but improved the world.

"Curtis hopes that his music inspired people and he wanted his songs to be uplifting," Heiman said. "He wanted people to think about themselves and the world around them, making this a better place for everyone to live."

A 1990 onstage accident left Mayfield fully paralyzed but his career was far from decline. In 1996, Mayfield's New World Order was nominated for three Grammy Awards with the duet, We People Who Are Darker Than Blue, orginally recorded in 1970 for Mayfield's first solo album, was reprised with Aretha Franklin and Mavis Staples.

Born in Chicago on June 3, 1942, Mayfield's distinctive tenor voice was developed with his pre-teen band, The Alphatones. In 1956, he joined church choir member Jerry Butler, brothers Arthur and Richard Brooks, and Sam Gooden in a new group, The Roosters. They worked the clubs and recorded with Bandera and Vee-Jay Records.

In 1958, The Roosters were renamed The Impressions and recorded For Your Precious Love, which was No. 11 in the United States. Although Butler left the group, Mayfield continued with a string of hits including, He Will Break Your Heart, Need To Belong To Someone, and Find Yourself Another Girl.

ABC Paramount Records gave The Impressions a recording contract the next year and the group had a Top 20 hit with Gypsy Woman, the beginning hit in a decade of success.

Mayfield compositions including It's All Right, 1963, hit the charts and influenced the musical style of artists including Gene Chandler, Major Lance, Jan Bradley and Walter Jackson. Mayfield produced most of their hits.

Mayfield found success in the 1970s with the soundtrack to "blaxploitation" film Superfly, 1972. Freddie's Dead, and the title track spent four weeks at the top of the charts.

As a producer, Mayfield shepherded the hit soundtracks to the films, Claudine, 1974 with Gladys Knight & The Pips, and Let' Do It Again, 1975, with the Staple Singers. He produced two Aretha Franklin albums, Sparkle, 1976, and Almighty Fire, 1978.

He also recorded critically-acclaimed solo albums including Back To The World, 1973, Sweet Exorcist, 1974, Got To Find A Way, 1974 and There's No Place Like America Today, 1975. But as the disco craze took over, Mayfield's sound and socially-pertinent lyrics became out of step.

Mayfield undertook a brief U.S. tour with Jerry Butler in 1983, then four years later, he toured Britain with The Blow Monkeys, whose 1987 release, Celebrate (The Day After You), featured Mayfield and Mayfield-inspired tunes. The next year saw an international revival of interest in Mayfield music.

The stage was set for a comeback until 1990 concert at Wingate Field in Brooklyn. Wind blew a light tower over, hitting Mayfiled as he walked on the outdoor stage. Mayfield was taken to Kings County Hospital where doctors diagnosed him with permanent paralysis from the neck down.

Mayfield himself recorded Let's Do It Again, for All Men, marking the first time he had sung since the 1990 stage accident.

"I lost my husband, the father of our children, my best friend and my soulmate," said Mayfield's widow, Altheida. "But I know that he is in the hands of the Lord and he is finally at peace. Thank God his music and his legacy will live far beyond today."

Today, Mayfield's legacy lives on with his work being sampled by hip-hop and rap artists including Coolio, Dr. Dre, Snoop Doggy Dogg and R. Kelly.

In addition to his wife, Mayfield is survived by his mother; 10 children; two sisters; a brother; and seven grandchildren.

Mayfield lived in Atlanta where he continued to write and record. Funeral services were incomplete.