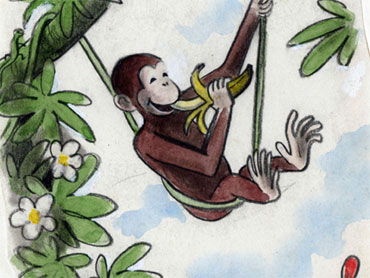 Ever wonder why Curious George is so curious? Or why the monkey hero of the "Curious George" children's books is so fond of travel, so prone to mischief, yet always narrowly escapes disaster?

A new exhibit at New York's Jewish Museum suggests that curious readers need look no farther than the real-life adventures of the intrepid husband-and-wife team who created the beloved character.

H.A. and Margret Reys - he changed the name from Reyersbach - were German Jews living in Paris on the eve of the Nazi invasion, increasingly concerned about finding safe haven. Two days before the Germans marched into Paris, they fled on bicycles carrying drawings for their picture books, including one about a mischievous monkey then called Fifi.

Curator Claudia Nahson explains that Hans and Margret created the monkey character that is always on the run while they themselves were on the run. The recurring motif of the monkey's narrow escape from danger is another autobiographical detail.

Twice in the months leading up to their escape, the couple was questioned by authorities suspicious of their German accents. Both times they were let off the hook when officials learned what they were really up to - making children's books.

While the exhibit touches on the harrowing conditions they endured on their four-month flight in 1940 from France to New York, it's more about the unusually long and fertile artistic collaboration between Hans and Margret, whose fiery personality is said to be the inspiration for George's insatiable curiosity and spunk.

Hans Reys was a gentle, pipe-smoking, self-taught artist who toiled for a time in commercial art designing circus posters before launching his career as a writer and illustrator of children's books. Margarete Waldstein, who shorted her name to Margret, was the more assertive of the two. She had studied art and photography at the famed Bauhaus School in Germany and had strong opinions about nearly everything, including her husband's work.

Both loved animals. Hans liked to sketch in zoos, and the couple kept pet marmosets in their apartment in Brazil in the 1930s. Margret even knitted sweaters to keep the tiny monkeys warm on the couple's cold ocean passage to Europe in 1936, but the creatures didn't survive the voyage.

The exhibition features nearly 80 original drawings and vibrant watercolors for the more than 30 books the couple wrote and illustrated. The most famous, of course, is Curious George - the "good little monkey" captured in the wilds of Africa by a man in a large yellow hat and taken to the city to live in a zoo and later, the man's home.

The idea for George began in an earlier book about a lonely giraffe named Raffy who befriends nine monkeys, the youngest of which is called Fifi. Eventually, the Reys decided to develop a story just about Fifi. It was one of the stories they smuggled out of France, only to learn when they got to the U.S. that American publisher Houghton Mifflin had doubts about the name Fifi for a boy monkey.

And so Fifi became George in the United States - and Zozo in Britain. With George VI then king of England, it seemed disrespectful for a monkey to have the same name as the British sovereign. The Curious George books, including the seven original stories by Margret and Hans, were eventually translated into many languages, selling tens of millions of copies worldwide.

It's not hard to see why. With simple lines and bright, buoyant colors, the Reys created an imaginary world full of innocence and optimism. No reader would ever discern that their lighthearted, good-natured outlook was entirely at odds with the circumstances they faced in the years leading up to and during World War II.

The exhibit will be on view at The Jewish Museum through Aug. 1 then travel to the Contemporary Jewish Museum in San Francisco, where it will run from Nov. 14 through March 16, 2011.