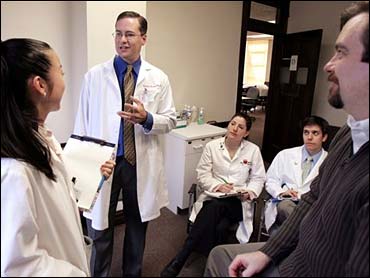 The four familiar words physicians always dread come when the office visit is ending, doctor's pen clipped back onto the white coat pocket and hand reaching for the door.

What comes next could be as innocuous as a harmless freckle — or a bombshell.

"You're walking out the door and they say 'Oh, I've got this chest pain I meant to tell you about,' so you have to go back into the room and start over again," said Dr. John Bonavia, a family doctor at Columbia St. Mary's-River Glen clinic in Milwaukee.

Doctors call it "the doorknob phenomenon."

Doctors' rushed schedules and patients' natural reluctance to reveal frightening or embarrassing symptoms make those questions at the doorknob almost inevitable, but medical schools increasingly are teaching students how to avoid such situations.

Dr. Rita Charon, who runs the narrative medicine program at Columbia University's medical school, said the phenomenon might even be one reason that doctors' visits often don't start on time — the previous patient may have had a doorknob question requiring another exam.

Part of Charon's program encourages doctors-in-training to listen and better "read" patients and their greatest concerns.

"You really have no idea of what part of life is going to come up and you really need to signal some desire to hear about it," Charon said.

Charon teaches a method she has adopted with her own new patients, whom she tells: "'I'm going to be your doctor and I need to know a lot about your health and your body and your life' — and then I stop talking."

She doesn't write anything down, or check the computer — she just listens.

"When I did this the first time, the patient started crying, saying 'No one ever let me do this before,"' Charon said.

Nancy Conley, a 48-year-old secretary in Springfield, Mo., says embarrassment led to her own doorknob questions about chronic constipation, along with a belief that nothing could be done for the condition, caused by irritable bowel syndrome.

She sometimes talked herself out of mentioning it at all, trying to downplay it in her mind during the visit "even though I'd go home to my own little hell," she said.

Conley's advice to doctors for avoiding such resistance is to "slow down."

A rushed atmosphere can make patients feel uncomfortable about mentioning bothersome issues. Instead, Conley said, doctors should take a moment to imagine what it's like to be the patient.

"They're scared, they're taking off work probably to be there ... they don't want to be humiliated by putting on those stupid little gowns. If a doctor just stops and says 'Whoa, how would I feel if I were in their shoes right now,"' that could help break the ice, Conley said.

So can the old-style, doctor-centered approach, she said, citing a medical study published 20 years ago showing that doctors interrupted patients an average of just 18 seconds into a routine office visit.

"Often it happens because doctors, including myself, don't do a good job of getting a sense at the beginning of the medical encounter what the needs are of the patient," said Dr. William Harper, an internist who teaches communication skills to University of Chicago medical students.

Harper tells students that one remedy is simply asking patients: "Anything else?"

"Just asking that simple question, whether it be at the beginning or end of the encounter, can be enough to prevent the doorknob phenomenon," he said.

Margaret Fitzpatrick, a nurse at Advocate Christ Medical Center in Oak Lawn, Ill., says patients can help, too, by writing down questions to ask the doctor before each visit.

Fitzpatrick and two other nurses wrote a book titled "What to Ask the Doc," designed to help patients take a more active role in their health care and be quick to say what's on their minds.

"People need to be better prepared for the experience of going to the doctor," Fitzpatrick said. "So that if there is this suspicious mole on the neck, take the responsibility of bringing it up ... rather than hoping that the doctor will see it and bring it up with you."