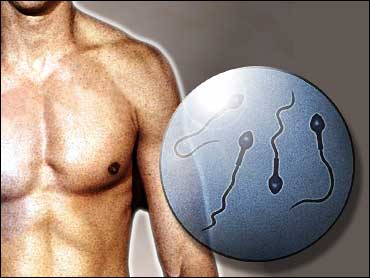 Fertility treatments have come a long way since the birth of the first test tube baby 24 years ago but the next big improvement must be in male infertility, a leading expert said on Friday.

If scientists could discover a way to boost falling sperm counts, demand for in vitro fertilization (IVF) and other fertility techniques for women would halve, according to
Professor Hans Evers, chairman of the European Society of Human Reproduction and Embryology (ESHRE).

Fewer women would have to be prodded with needles, injected with drugs or have their eggs removed, mixed with sperm and put back again to overcome a problem in their partner.

"If there is an advance in treatment it should be in male infertility," Evers told Reuters.

"There must be a way, in the future, to cure male infertility -- an easier way than submitting the female partner to these kinds of invasive treatments."

The topic will be discussed when many of ESHRE's 4,000 members gather for their annual conference in Vienna on Sunday, but Evers said it is unlikely a way will be found to boost sperm production anytime soon.

Intracytoplasmic sperm injection (ICSI), in which a single sperm is injected into an egg, has helped men who produce little or poor quality sperm to father children but it is an invasive procedure for women.

"I'm sure within 10 years there will be something to stimulate sperm production in the site where it has to be produced -- in the testes," Evers said.

In the meantime existing fertility techniques are becoming simpler and success rates are improving.

About 25-27 percent of couples undergoing fertility treatment take home a live baby. Others are left disappointed and the lucky ones get a bonus with two, three or more babies.

But Evers said the success rate could climb to 35 percent and the chances of a multiple birth -- potentially dangerous for both the mother and babies -- would be reduced if only the healthiest embryo is replaced in the womb.

Despite claims by Italian fertility expert Severino Antinori, who has said he has had some success with his controversial cloning programme for infertile couples, Evers doubts human cloning will solve the infertility problem.

"Cloning is a possibility but not in the hands of Doctor Antinori," he said.

"If human cloning is done, it will be by one of the major laboratories which have decades of experience. I cannot image that one single guy in Italy can start a lab and clone people."

Evers said ESHRE had considered banning Antinori, who is a member, but decided against the move because it is an open organization.

To his knowledge none of the world's leading cloning experts is attempting human reproductive cloning. Instead, they are concentrating their efforts on therapeutic cloning and using stem cells -- "master" cells in the body capable of turning into other cell types -- to treat diseases ranging from Parkinson's and diabetes to heart disease.

Evers said scientists are also studying the possibility of replacing damaged cells in the testes with donor stem cells to increase sperm production as a treatment for male infertility.

"That seems to be feasible at the moment," he said, adding that animal studies have already begun.

The 18th Annual Meeting of ESHRE in Vienna runs from June 30 until July 3.