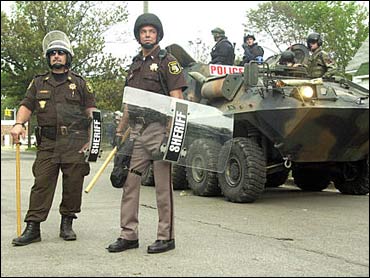 It was a quiet night, finally, in Benton Harbor, Michigan, scene of riots Monday and Tuesday night, in response to the death of a black man in a motorcycle crash during a police chase by white officers.

The quiet overnight could have been a response to appeals from the dead man's family to stop the riots, which have been fueled by racial tensions and anger over problems in the town including poverty.

The peace might well have been forced: by some 230 additional police officers on patrol in Benton Harbor, which normally has only 26 officers.

Some of the police patrolled in tanks, enforcing an overnight curfew that ended at 5 a.m., with the help of a steady, heavy rain.

City officials said they decided to get tough on the curfew - already on the books, for anyone age 16 and younger - because many of those involved in the riots were in that age group.

Steven McCoy, a member of the City Commission, pleaded for calm, saying: "Let's don't destroy our city. This is our city. When it's all said and done, it's going to take us to put it all together again."

Terrance Shurn, 28, of Benton Harbor, was killed early Monday when his speeding motorcycle crashed into a building as he was being chased by Benton Township police.

"Some people say Terrance wouldn't stop because he feared for his life," said one Benton Harbor woman, Nanette Partee.

Others point to tensions created by Benton Harbor's 25 percent unemployment rate and the stark contrast to the city of St. Joseph, just across the river, 90 percent white, with upscale shops and a jobless rate of just 2 percent.

"Benton Harbor (is) one of the poorest communities in the state of Michigan," says Benton Harbor city commissioner Ralph Crenshaw, who also happens to be the dead man's uncle. "There's no excuse for us not having the same opportunities for jobs."

No serious injuries were reported in Monday's violence. But late Tuesday, bottle-throwing residents overpowered the small police force and hundreds spilled into the streets, burning at least five buildings and beating or stabbing about a dozen people.

Two firefighters trying to reach a burning building near the crash scene were attacked by a mob, even though about 130 state troopers and 100 other officers armed with tear gas were on patrol.

It was 4 a.m. Wednesday before the violence was quelled. Benton Harbor City Manager Joel Patterson said 10 to 12 people were arrested and charged with civil disobedience. One person was charged with assault with a deadly weapon.

"It is so unnecessary. It is unbelievable to see this in our community," said Police Chief Samuel Harris.

Residents complained that they have long been harassed by the 25-member police force.

Area ministers walked through the area Wednesday evening, talking to residents and discouraging them from violence. Shurn's brother, Raynard, 33, also called for peace at a community meeting Wednesday.

"I would say to the people of Benton Harbor that I feel your pain, your frustration and, yes, your anger," he said. "But I ask you and I beg you, please stop the violence."

Raynard Shurn, who spent 10 years as a city police officer, said several community leaders assured him there would be a "fair and just" investigation into his brother's death.

"I trust them completely and ask that you do the same," he said.

"You don't want to overreact and cause an unintended consequence, which is community backlash even greater than the one we've seen," Gov. Jennifer Granhold said Wednesday, as she sent state troopers to Benton Harbor. "We want to proceed with great caution."

Benton Township officials promised to examine their policy on high-speed police chases after about 70 residents and city officials questioned them at a public meeting Tuesday night.

Police have said that they do not know why Shurn fled officers. But they said his license had been suspended and officers found a small amount of marijuana on him after the crash.

Shurn's aunt, Rosemary Shurn, said the several arrests on her nephew's record were for minor offenses. "He had turned his life around and changed," she said.