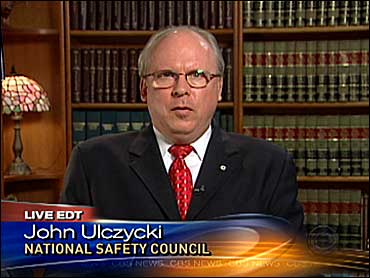 There's hardly a town in America that hasn't been touched by the tragedy of fatal car crashes involving teenagers.

Auto accidents are the leading cause of death for teens, so their parents need to know how to protect their kids when they or their friends are behind the wheel.

On The Early Show Thursday, John Ulczycki, executive director of transportation safety at the National Safety Council, offered advice for teens and their parents.

Vehicular crashes are the leading cause of death for teens, with nearly 4,000 accident-related fatalities per year in the United States, and summer is the deadliest such season.

When teens are out of school, they log more miles behind they wheel and often have friends in the car, which increases their risk for a crash. In the summer, more young people are finishing drivers' education classes and hitting the road on their own for the first time, often with little experience.

Ulczycki stressed that the two major factors in fatal teen crashes are inexperience and distraction. Alcohol is involved, he says, but to a lesser extent.

Parents frequently don't spend enough time with teens in the car before allowing them to drive in certain situations. Before teens drive in various situations, whether it's on rural roads, the highway, at night, in bad weather, etc., they should have had their parents with them in the car under those circumstances.

There are things that happen on the road that experienced drivers see every day: drivers being cut off, aggressive drivers, etc. Experienced drivers are used to that and know how to react. Most teens, however, overreact, and get into crashes because they simply don't react appropriately.

The safety council finds that teens may have enough hours in the eyes of their state to get their licenses, but teens learn at different rates. Some states have 50 hours of practice requirements. Some teens might be ready at that point, others not. Parents need to recognize this and determine whether their child is confident because, once teens get their licenses, they can go wherever they want without supervision.

Distraction is another significant factor adding to the risk of teens on the road, Ulczycki says. Distractions come from cell phones and other teen passengers. Teens get into far more crashes when they have other teens in the car.

Adults, on the other hand, get in fewer crashes when other adults are in the car. Adults actually drive more safely with passengers. Teens show different types of risk behavior, perhaps because of peer pressure. It's also been established that seat belt use is lower when more teens are in the car. When you put three or more teens in a car driven by a teen, odds of being in a crash are four times higher than if they were by themselves. That's why a lot of states have passenger restrictions.

As for drunk driving, for 16- and 17-year-olds, it's a relatively minor factor, at less than half the rate it is for adults. Alcohol is involved in 40 percent of crashes among adults. For teens, it's 20 percent. If you had to put it in terms of what's causing teen crashes. Though, at ages 18, 19 and 20, alcohol use becomes a greater factor in teen collisions.

As for tips offered by Ulczycki:

Eliminate the distractions: If your state doesn't have laws banning cell phones, then ban them yourself in your teen's car. And, regardless of state laws, prohibit your teen from taking other teen passengers along for the ride.

Require and set firm penalties for alcohol use and lack of seatbelt use: Teens get into more crashes than other people, yet they wear seat belts less frequently than other people. So, as a parent — set strong rules.

Communicate: Parents have to work with teens in an open dialogue. This is a lifelong learning process. Parents need to be engaged. Would you ask 16- or 17-year-old to do electrical work in your house? Just because they have the required number of hours driving doesn't mean teens are experienced enough. Too many parents say it's OK for them to drive freely once their state does. . Ulczycki suggests a parent/teen agreement: Know what they're going to do and what parents are going to do. A big part of the problem is parents don't make the commitment in terms of time and communication to make teens competent drivers.

General advice: Know who teens are riding with, and whether that teen is a competent driver, and whether they're following the state law on curfews and passengers.

If your teen is driving alone, you should drive with your teen in advance. Make sure he or she has traveled the road before in the same conditions.