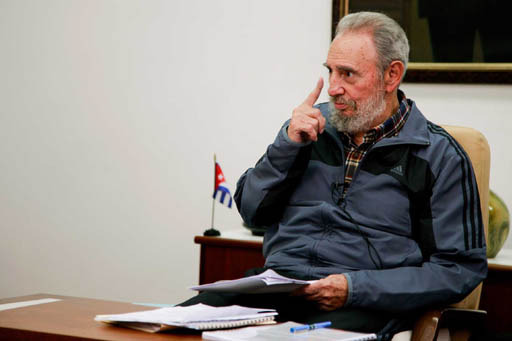 Havana - It's looking more and more like Cuban former President Fidel Castro will appear at the upcoming July 26th rally in the central city of Santa Clara, some three hours east of Havana. Rumors are rife that he will be there.

It would only be justice for that to happen as the "Maximum Leader" of the Cuban Revolution succumbed to illness after speaking to the nation during the 2006 festivities marking the anniversary of July 26, 1953 when along with a band of intrepid rebels he launched an eventually successful fight to oust the Batista dictatorship.

Until several surprise appearances earlier this month, the elder Castro had not been seen in public since then. Rare photos and government edited video for a time showed him in a track suit. In his latest outings, he has been dressed in a sport shirt and slacks, seemingly underlying his civilian role in Cuban life. But lest anyone forget that he remains the head of the all-powerful Communist Party, Castro popped up Saturday morning in his trademark olive green - though without stars or insignia - to visit a town some 40 miles from Havana where he went to the mausoleum that houses the remains of several of his July 26th fighters. Below the uniform top he wore regular dress pants. Semi-retired might be that message. His voice was strong and he stood unaided during the reading of a long message to revolutionaries throughout the island.

Even if Castro attends Monday's rally, the day should belong to his successor and younger brother, President Raul Castro, who is expected to deliver Cuba's traditional State of the Union address, as he has done for the past two years.

The competition for the limelight will be fierce, however, as Venezuelan President Hugo Chavez, a Fidel Castro disciple, says he will be there too. Chavez announced on Venezuelan TV that Raul had asked him to be a guest speaker. As far as I recall, it will be the first time in the past 30 years I've been covering Cuba that there is a guest speaker at this intensely national event.

Perhaps the Castros hope to give Chavez a diplomatic boost as he politically skirmishes with neighboring Colombia. And perhaps the United States and Latin American governments will be taking note, but it is safe to say most Cubans will be frustrated if he in any way detracts from the domestic issues they want to hear about.

"We expect some solution to some problems that we have, and we hope, at least, that some measures will be taken," said Leonardo Jimenez, 52, a professional chauffer, one of the people we spoke with on Havana's streets about their expectations for Raul's speech.

"People have been talking for a long time about a single currency, to fix the currency problem, the problem of the economy. I imagine that he has to talk about that, because we are in a big mess," he added.

Cuba has a highly unpopular dual currency system. There is the non-convertible Cuban peso and the Cuban Convertible Currency, or CUC, which came into existence in 1994. The CUC is, theoretically, at least, backed by hard currency. Foreign visitors change their EUROS or U.S. dollars into CUC to pay their hotel and restaurant bills. Cubans buy CUC at a highly unfavorable exchange rate with the regular Cuban pesos that they receive as wages. And the only reason they do so is because they have to.

"Take toiletries. Basic products like that have to be bought in shops that charge CUCs. And as far as I know workers here earn Cuban pesos," Luis Diaz, 26, a computer specialist, said.

Bath soap, toothpaste, cooking oil and butter are just some of the products Cubans can only obtain in CUCs.

Nearly everyone we spoke to raised the same issue.

"There is one measure that the entire world is waiting for - that is the elimination of the dual currency - and it's a measure that our Government and our economists must analyze sooner or later," Ruben Pupo, 47, a security guard, said.

Many Cubans believe their own government can do something to get them out of the hole they're in while still paying lip service to the U.S. economic embargo and the world economic crisis.

Gustavo Diaz, a 44-yar-old swimming coach, named some of the thing he hoped Raul would touch on in his July 26th speech.

"People are talking about the dual currency, the problem of supplies - that is to say the issue of farming."

His thought was picked up by retiree Candido Martinez.

"We have had many problems with agriculture of late, with sugar cane, root vegetables, and there is not much to see in the markets for reasons that nearly everybody knows - a lack of organization, deficiencies in farming. And that has to improve and I think that some measure to fix this situation should emerge on July 26th, but not just words or something that remains on paper. We need action."

Luis Diaz, like many of the younger people we spoke to, is not hopeful. "They haven't done the things they've said they would do until now, and on Monday they will say new things. First they have to implement the pending things."

Among the many steps that Diaz thinks should be taken is giving people the right to open their own businesses. "There are people who have the money to do things and the State should make it possible for them to act on it. There are many locations in the city where they could open businesses, places that are now falling apart."

Beauty parlors and barber shops have been privatized in the past year. Diaz thinks that experiment should be extended to other areas.

Two reliable sources say the privatization or corporatization of services and other small businesses is most likely on the agenda of the upcoming National Assembly, or parliament, session on August 1, the closing session of which they assured me Fidel Castro would attend.

Furthermore they say the long-awaited Communist Party Conference will be held in November and will take up the issue of reorganizing the Cuban economy and the establishment of a single currency. But just how cash-strapped Cuba will be able to do that they were unable to say.

They did say that the surviving currency would be the Cuban peso. Evidence of this appears in the opening of some restaurants, cafeterias and stores across the country selling products normally priced in CUCs for Cuban pesos, but at elevated cost. A can of beer is 10 pesos and a large can of tomato puree is 120 pesos. One university professor and department head said that even on her salary of more than 600 pesos a month - well over the average - she can rarely afford these items. "It costs 100 pesos, if I'm lucky, to take my three children for a simple lunch at one of the peso cafeterias. How many days' work does that 100 pesos represent?" she said.

These are the issues that Cubans will want to hear about next Monday. An appearance by Fidel Castro would be the icing on the cake, but the cake is what they are interested in.