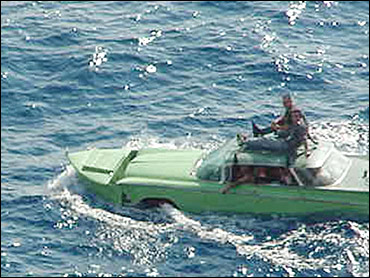 Eleven Cubans trying to sail to Florida in a 1950s Buick converted into a tailfinned boat were intercepted at sea by the Coast Guard and will be sent back to their homeland, exile activists said Wednesday.

Marciel Basanta Lopez and Luis Grass Rodriguez, the two men who turned the classic car into a floating vessel, tried a similar stunt last summer and got caught: They set out for Florida in a 1951 Chevy pickup with pontoons made out of empty 55-gallon drums and a propeller that pushed it along at about 8 mph.

On Monday, the men set out again, with four other adults and five children, relatives said. The Coast Guard intercepted the group late Tuesday en route to the Florida Keys, picking them up off Marathon, about 90 miles southwest of Miami, activist Arturo Cobo said.

"My uncle is very brave. He is not irresponsible," Eduardo Perez Grass, a nephew of Luis Grass, said in Havana. "There is no danger to the children. The car is very safe."

He said the others on board were Luis Grass' wife and son; Marciel Basanta's wife and their two children; and a third couple with two children.

The Buick's doors had been sealed to keep water out and it was powered by its original V-8 motor, said Eduardo Perez Grass, who was among those on the earlier attempt to reach the United States.

"My cousin isn't crazy. He wants to be free," Basanta's cousin Kiriat Lopez, who lives in Lake Worth, told The Miami Herald. "That's how crazy he is."