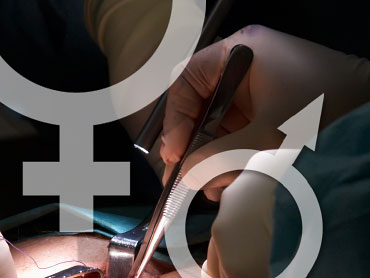 A sexologist and gay-rights advocate, Mariela Castro runs the Center for Sex Education, which prepares transsexuals for sex-change operations and identifies Cubans it deems ready for the procedure.

Speaking to reporters during the fifth Cuban Conference on Sexual Education, Orientation and Therapy, Castro said surgeries began in 2008 but would not specify exactly how many have been performed or how much they cost.

She said only that Cuban doctors working with Belgian counterparts have gotten to "less than half" of the 30 islanders approved to undergo the procedure.

The operations are covered by Cuba's universal health care system, even though some have protested the decision to allow them

either because of general opposition to the procedure or due to its high costs for a developing country with economic problems.

"We schedule a certain number per year based on economic circumstances," Castro said, adding that, because of budget constraints, sex changes are not offered to foreigners who travel to Cuba for medical care.

Castro also said Tuesday that she plans to prepare a letter to the leadership of Cuba's Communist Party urging authorities to draft a measure directing that homosexuals not be barred from joining the party.

Such a decree would be similar to one approved in the 1990s expressly allowing Cubans of all religious affiliations to join.

Gays are not technically banned from the Communist Party, but Castro said such a measure would help better cement their role in politics.

Castro also said her center will continue to push the single-party government to rewrite civil codes and recognize same-sex unions, though not full gay marriage.

However, she said the group has stopped pushing for same-sex couples to be allowed to adopt children, saying Cuba's legal code provides no means for such a move.