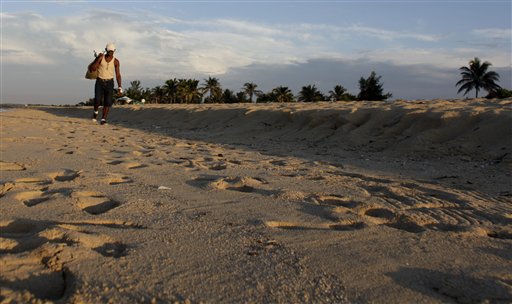 Cuba is ready to use just about everything at its disposal, from its well-oiled civil defense system to the soldiers of a totalitarian government, to keep swine flu cases to a minimum.

Everything but a vaccine.

As the U.S. prepares an extensive health survey for side affects from its massive inoculation plans, Cuba's No. 2 health official says relying on a shot to contain a world pandemic is risky as best _ and demoralizing at worst.

"Nobody knows if it would work," Dr. Luis Estruch told The Associated Press in an interview. "How safe would it be?"

Cuba's sophisticated public-monitoring system and geographic isolation as an island have kept swine flu cases to just 435 in a country of 11 million _ and no deaths to date. That's roughly one in 25,000 people, compared with one in 6,900 in the U.S. and one in 4,000 in Mexico.

Swine flu plans for the new season involve all ministries, including the armed forces. If necessary, the government will isolate neighborhoods or entire villages, shut down highways and dispatch medical teams to communities affected by swine flu, Estruch said.

Soldiers can go door-to-door to enforce mandatory quarantines and evacuations _ and authorities think nothing of severing areas from all contact with the outside world.

"In a matter of hours, we can determine what resources to send," Estruch said. "We've thought it out. ... We've considered what to do if we have to paralyze a town, if we have to stop public transit, if we have to close the schools."

It works _ but only at the cost of individual freedoms, said Jose Azel, an economy specialist at the University of Miami's Institute for Cuban and Cuban-American Studies.

Cuba "certainly has advantages to do what it wants to do that we can't _ commanding people," he said.

Globally, the virus has caused at least 3,205 deaths since it first appeared in Mexico and the U.S. earlier this year, the World Health Organization says. More than a quarter-million cases worldwide have been confirmed, though most are mild and don't require treatment.

This fall, the U.S. government plans to track possible side effects as it attempts to vaccinate more than half of the 300 million population in just a few months.

It's not that Cuba isn't up to the task of developing a vaccine.

Cuba's Center for Genetic Engineering and Biotechnology makes nearly 100 products, including more than three dozen drugs to fight infectious diseases. The island also has 12,000 registered scientists, impressive for a tiny and poor nation, reflecting the importance the government places on medicine and science.

"If we had confidence in a vaccine, we would get it," Estruch said. "Immediately."

But he warned against promising a cure for a flu strain that can evolve at any time. And he cited the 1976 U.S. campaign to vaccinate millions against a swine flu epidemic that never happened.

Hundreds of U.S. citizens blamed that vaccine for other illnesses, including Guillain-Barre Syndrome, a neurological disorder that generally is reversible but can cause permanent paralysis and in some cases is fatal. Lawsuits cost the U.S. government almost $100 million.

Instead, Cuba has its civil defense system, which has proved invaluable in carrying out mass evacuations and saving lives during hurricanes that batter the Caribbean island nearly every year.

Its disaster-response machine _ overseen by President Raul Castro and the armed forces _ is organized at the block level in every town, and the government collects health data daily from its extensive network of neighborhood clinics.

"When it comes to hurricanes, there are people in each area who are responsible for keeping track of everyone _ who will need assistance, pregnant women, the elderly, which buildings are vulnerable," said Wayne Smith, a former top U.S. diplomat in Cuba who is now with the Center for International Policy in Wasington. "It's sort of the same thing with the health system."

That's how the island detected its first swine flu cases.

For two weeks after Mexico reported the outbreak on April 24, Cuba's health ministry monitored everyone who arrived from that country before instituting the monthlong travel ban with almost no advance notice on May 1.

"We detained them in a matter of hours," Estruch said.

The students were treated and allowed to stay in Cuba.

Also working in Cuba's favor is its health care system. Treatment is free at clinics in most neighborhoods, though the island's brand of universal coverage faces unspecified cuts to stem what Raul Castro called "simply unsustainable spending" in an August speech.

"When a person goes to the neighborhood clinic with a cold he's checked for the virus. And that's how we're going to confront the second wave," Estruch said. "I'm not saying there isn't an epidemic in Cuba. There is. But it's limited."

What Cuba won't do this time around is close its borders again. The May travel ban was "totally necessary at that time" because nobody knew what they were up against, Estruch said.

Today, passengers arriving at Havana's Jose Marti International Airport are still greeted by customs workers wearing face masks. They are asked if they have flulike symptoms and are subject to a thermal imaging scan. Airline pilots are required to report if any passengers were sick.

Dr. Jarbas Barbosa of the Pan American Health Organization praised Cuba's close collaboration with international health agencies. But he questioned the government's methods of isolating people to stem the spread of the virus.

"In general, we have no evidence that they work," said Barbosa, who is chief of health surveillance and disease management. "And they can produce a profound social and economic impact."