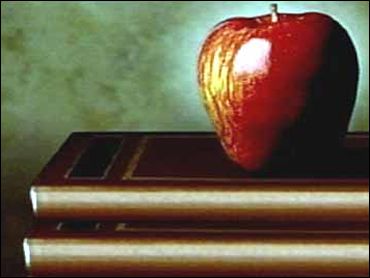 A 6-year-old boy's excitement over joining the Cub Scouts may just land him in reform school for 45 days.

Zachary Christie was suspended from his 1st grade class in Delaware's Christina School District after bringing a camping utensil - a combination knife/fork/spoon - to use at lunch, prompting calls to reexamine schools' zero-tolerance policy for bringing weapons to school, according to a New York Times report Monday.

Zero tolerance policies were instituted in many school districts across the country, at least in part due to violence at Columbine and Virginia Tech, the report notes. Their rigid enforcement is designed to eliminate the appearance of bias or discrimination on the part of school officials.

The school district's policy is enforced "regardless of intent" and "does not take into consideration a child's age," reports CBS News correspondent Jim Axelrod.

But residents, and some lawmakers, are now wondering why schools can't apply a more common-sense discretion to such instances.

"It just seems unfair," said Zachary, who is being home-schooled while his mother, Debbie Christie, tries to fight the suspension. That involved Zachary appearing before a district disciplinary committee with his karate instructor and mother's fiancé vouching for him as character witnesses.

"Zachary wears a suit and tie some days to school by his own choice because he takes school so seriously," his mother said. "He is not some sort of threat to his classmates."

Christie started a Web site, helpzachary.com, to drum up support for her son.

State Representative Teresa L. Schooley wrote the disciplinary committee, asking each member to "consider the situation, get all the facts, find out about Zach and his family and then act with common sense for the well-being of this child."

But the strict enforcement of the policy has its supporters.

"There is no parent who wants to get a phone call where they hear that their child no longer has two good seeing eyes because there was a scuffle and someone pulled out a knife," said George Evans, the school district board's president.

There has been a move to give school officials more flexibility in "weapon"-related incidents. After a third-grade girl was expelled for a year after bringing in a knife to cut the birthday cake her grandmother sent in to the class, a new law was passed allowing officials to modify punishments on a case-by-case basis. But that was for expulsions, not suspensions as Zachary is faced with. Another revision to the law is being drafted to address suspensions, according to the report.