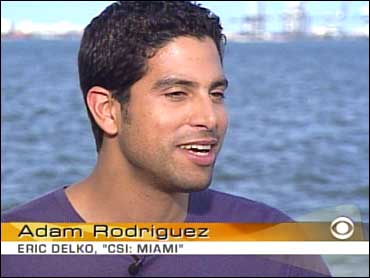 Things have been getting very personal on the hit CBS drama, "CSI: Miami."

Earlier this season, viewers learned that Eric Delko has an older sister who's battling cancer and falling in love with CSI chief Horatio Caine.

Monday night, both of Delko's world's collided when he was surprised to learn that his big sister was being questioned by the FBI.

told
national correspondent Tracy Smith it was a chance to bring his personal life to the character.

"I have a sister who I love dearly and have gone through plenty of issues with throughout our years of growing up together, so I had plenty of ammunition to go to and to be able to use, and that part of it, I was lucky for that," Rodriguez said.

"Adam," she says, "is awesome, so easy to work with. I swear, we probably were brother and sister in a past life. He's very easygoing, and just a good guy to work with and be around, and good energy. Yeah, he's fun!"

In one scene, Eric gets emotional when speaking about Marisol, and Rodriguez says that's true to form for him in real-life: "You've got all of these emotions stored up. I guess this is one of the reasons you want to become an actor in the first place and so, not having a chance to go to these places for the last three years, you've got a pretty good reserve of anger or, you know, or passion built up. … You just have to be open to letting yourself get angry and go to these places in front of the people that you work with."

Eventually, Horatio Caine, Eric's boss and soon-to-be brother-in-law, played by David Caruso, tells Delko to leave his private life out of the lab.

"That's hard to do," Rodriguez reflects. "There are things in your life that you're passionate about, above and beyond whatever your career is. For me and for this character, it definitely goes into family. It's a difficult thing to have someone tell you, you've gotta put those feelings aside and stay focused on your job and make sure you do your job right, and he's right, but it's a challenge."