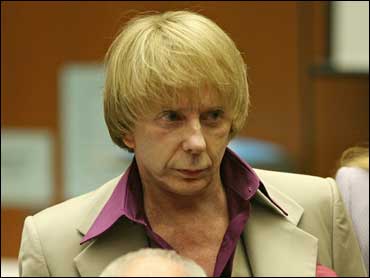 After five weeks of dramatic personal stories about the music producer and the B-movie actress shot to death in his home, prosecutors are shifting their focus on Tuesday to science and the critical forensic evidence.

There will be discussions of blood spatter, fibers, gunshot residue, DNA and the path a bullet took when it killed actress Lana Clarkson.

A coroner and crime lab technicians are due on the witness stand beginning Tuesday to explain how such evidence can offer insight into what happened at Spector's castle-like mansion on Feb. 3, 2003.

A gunshot that lasted a second will be dissected for days.

"The prosecution has to show that the forensic evidence is consistent with their theory that Spector pulled the trigger or forced her to pull the trigger," said Loyola University law professor Laurie Levenson.

"This is a critical stage because this is where the defense has their focus," she said.

"We have one unimpeachable witness who has no motive to lie, no memory problems, no language problems, and that witness is science," said Kenney-Baden, an attorney whose specialty is forensic evidence. Her husband, Michael Baden, a renowned forensic pathologist, is expected to testify for the defense.

But first, the prosecution will present its own experts, most from the police crime lab and coroner's office. Prosecutors will call no outside experts, although they could have some waiting to testify in the rebuttal if necessary.

"Lana Clarkson will have to tell her story through the evidence and from the grave," prosecutor Alan Jackson said in his opening statement.

Clarkson's body, with a gunshot wound through the mouth, was found seated in the foyer of Spector's suburban Alhambra mansion. She had met Spector at the House of Blues, where she was a hostess, early that morning and agreed to accompany him to his home.

Jurors have seen gory photos of her bloody face. Her mother and sister averted their eyes at the sight, but they and two lawyers representing them have been present for every day of testimony.

Spector, whose once flamboyant image has been toned down with a series of frock coats in muted colors with coordinating silk shirts and pocket handkerchiefs, is a pale shadow of his former self. His hands tremble, said to be the result of medication, and his expression is flat. His appearance could be a plus for the defense.

"He looks old and passive and not particularly threatening," said Levenson. "He doesn't look like a big bad murderer."

The prosecution built its case against Spector in three phases. The first focused on Spector's past, presenting four women who claimed the legendary record producer threatened them at gunpoint in the 1980s and '90s. The witnesses — Joan Rivers' former manager, a music talent coordinator, a waitress and a free lance photographer — told of being terrorized by Spector after he had been drinking. Each said he pulled a gun when they said they were leaving.

"He walked up, held the gun to my face between my eyes and said, 'If you try to leave, I'm going to kill you,'" witness Melissa Grosvenor testified.

Prosecutors drew a parallel with Clarkson, whose purse was on her shoulder and appeared ready to leave when she was shot.

The trial's second phase focused on the hours before Clarkson's death, with witnesses telling of Spector's night on the town, visiting four different restaurants and clubs with different women, traveling in a chauffeured Mercedes and drinking liquor at each stop.

Prosecutors called witnesses to tell how he met Clarkson, and they tracked their movements through Spector's chauffeur, Adriano De Souza.

The Brazilian-born chauffeur offered some of the most damning testimony against Spector and underwent the most rigorous cross-examination.

He told of waiting for two hours outside Spector's home for Clarkson's expected departure, then hearing a "pow" around 5 a.m.

A defense attorney, stressing that English was De Souza's second language, tried to show the driver did not understand Spector. But the witness remained adamant and a videotape of his interview with police showed jurors that he easily handled questions in English.

Superior Court Judge Larry Paul Fidler has also overseen a series of hearings that culminated Wednesday in a ruling that cast doubt on the credibility of a key defense witness, renowned forensic expert Henry C. Lee.

Fidler determined Lee withheld a piece of evidence from the prosecution. The prosecution contended it was a piece of fingernail; Lee denied taking any such item from the scene. Defense lawyers say they still plan to call him to testify.

Spector, 67, rose to fame in the 1960s and '70s, changing rock music with what became known as the "Wall of Sound" recording technique. Clarkson was best known for a 1980s role in Roger Corman's "Barbarian Queen."