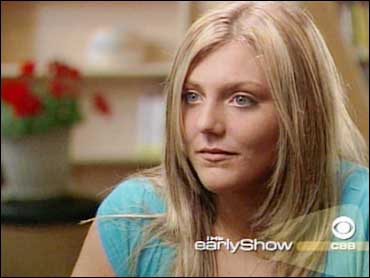 Crystal meth is a form of methamphetamine, the use of which has reached epidemic proportions in much of the country, especially the Midwest. Typically, people try it because they're looking for a higher high than they've found with other drugs.

But, reports correspondent Melinda Murphy in the second segment of the The Early Show's three-part series on methamphetamine abuse, it's also emerging as a drug of choice among women of all ages seeking alternatives to over-the-counter weight loss aids. And crystal meth can be dangerously addictive.

told Murphy
she started experimenting with crystal meth when she was 16, because of an obsession with her weight.

She says she had no idea what the consequences would be, but she adds, "Even if I did have some idea what it could do to you, I didn't care. It made me skinny, and it worked."

Rizzo's perceptions about her body had troubled her for years: "I was a hefty little girl. But it started when people would tease me every day about what I looked like and harassed me on the Internet. …Then it started in my head that, 'You're not good enough. You're not, you know, small enough.' "Rizzo says she saw crystal meth, which is made in home labs for the most part, as just another step in her battle to shed pounds.

And she did lose weight on crystal meth, a lot of weight.

The drug that enables people to party for hours and even days, also suppresses the appetite, Murphy explains.

Eventually, Rizzo dropped from 140 pounds to 118, but she still didn't think she was thin enough.

Rizzo wrote about that when she was high, and read Murphy a part of the letter: "I try so hard to look my best. I just want to look like the rest. Maybe one day I'll look like the person I want to be. It's that cute petite body that I want to see."

But, Murphy says, what started out as a way to diet soon became a full-blown drug addiction.

Rizzo tells Murphy she'd get the drug from "people. Around. Like teenage guys, definitely, you know, had it all the time and they would just give it to the girls. And girls would do anything for it."

"Well, pretty much, yes. …I'm ashamed of some of the things I've done."

"We've known for a long time," says Dr. Terry Horton, "that individuals who suffer from eating disorders have, in general, a higher rate of substance abuse issues."

He says Rizzo is not alone: "In California, for example, the young women who use this drug, about ten percent of 'em describe using it for its purposes of appetite suppressant."

But, he cautions, beware thinking that sounds like a good way to lose weight, and you could just do it for a couple of weeks and then stop: "That's the hook, is to think that you can control a dangerous drug … and that you can stop when you think you wanna stop. It's misleading. And that's the trap."

It's a trap that certainly ensnared Rizzo.And, ironically, the drug Rizzo started taking to look better had just the opposite effect.

"My face … would just suck in," she says. "My eyes caved in, and they were purple underneath."

Rizzo's mother, Robbie Floyd, realized this wasn't just another stage of adolescence: "It got to the point where things really started to change. Her attitude would change … and then trying to talk to her about it never got anywhere, because she would become blunt, very rude, very violent."

"All of a sudden," Rizzo says, "two guys bust in with a gun, and they're like, 'Where is it?' And I'm sitting on an ounce of meth … and (one of the guys) sat there and he put the gun up to my head and I told him to pull the trigger. And that's when I knew that I was mentally addicted to it, too. Because I didn't care, just as long as they didn't get the ounce (of crystal meth) under my leg."

"It became," Floyd says, "being really overbearing parents, and you have no choice. It's either that, or you lose your child."

At first, tough love worked. Rizzo got into outpatient rehab.

Then she relapsed, once again partying all night.

"I come home," Rizzo remembers, "and the first thing she says to me is, 'You're alive?' That was when I knew I needed to stop. I knew I needed (to do) whatever it took to stop."

So she gave her mom a letter she'd written before she came home that night.

The next day, Rizzo entered an inpatient treatment program.

But it wasn't easy. She ballooned to 218 pounds, and threatened suicide.

"Having your child hate you for keeping them in there, and not wanting to see you anymore, those were drives home that were not fun drives," Floyd cried. "It was very painful. But the outcome was worth it: I got my daughter back."

After a year and a half of hard work, Rizzo is back, Murphy says, and has lost 50 pounds the old-fashioned way, through diet and exercise.

She feels she's on the road to success: "I graduated last year. And I made up two years of school in eight months. So I know that if I try hard enough, I'll be able to do it."

Rizzo is holding down two jobs and plans to go to college to become either a nurse or a psychologist.

Murphy adds that, when you ask Rizzo if she regrets taking crystal meth, she says it's a case of mixed emotions since she wouldn't be the person she is today if she hadn't gone through all she did.