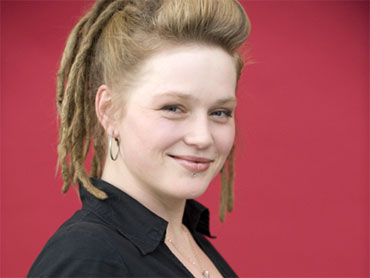 Andrew Garcia and Lee Dewyze are back in the "American Idol" judges' good graces, but it was Crystal Bowersox's transformation that had "Idol fans chattering Wednesday morning.

Bowersox, the earthy 24-year-old musician from Toledo, Ohio, traded her guitar and bare feet for a piano, a red dress and stilettos as she performed Gladys Knight and the Pips' "Midnight Train to Georgia."

Kara DioGuardi praised her because she "took that risk," while Ellen DeGeneres deemed it a "wonderful, wonderful idea." Cowell cautioned Bowersox to stay true to herself.

"I wouldn't ever do anything that wasn't comfortable for me," replied Bowersox, who also is comfortable talking back to the sarcastic and cantankerous Cowell.

Bowersox, who had promised fans a surprise, discounts talk of being the frontrunner. "It's still up in the air. It's up for grabs. It's not mine like Simon said - it's yours to lose or something - it's still definitely, you know, up in the air," she was quoted as saying before Tuesday's performance.

After a string of lackluster performances, Garcia, a 24-year-old musician from Moreno, Calif., finally wowed the panel with a stripped-down rendition of Chris Brown's "Forever."

Dewyze, a 23-year-old paint sales clerk Dewyze of Mount Prospect, Ill., treated the Fox singing competition Tuesday to a rock 'n' roll take on the Cornelius Brothers' "Treat Her Like a Lady."

Simon Cowell told Dewyze: "I want you tonight to go home, watch the show back and understand this is the night your life may have changed forever."

The sour British judge was also generous - in a totally different way - to a giggling Tim Urban.

After weeks of scathing critiques, Cowell practically surrendered on the night of R&B classics to the seemingly unstoppable shaggy-haired 20-year-old college student from Duncanville, Texas, after his uninspired rendition of Anita Baker's "Sweet Love."

"He's laughing because I don't think it makes any difference whatsoever what we say," testified Cowell.

"This was another hot night for you," Randy Jackson told James.

The reception wasn't as toasty, unlike previous weeks, for 20-year-old glass blower Siobhan Magnus of Marstons Mills, Mass., who is former judge Paula Abdul's favorite. DeGeneres and DioGuardi panned Magnus for being nervous during Chaka Khan's "Through the Fire." Cowell, meanwhile, asserted that Magnus' signature method of wailing was waning on him.

"I am getting bored of the screaming at the end," he said.

Didi Benami, the 23-year-old waitress of Los Angeles, was bashed for Jimmy Ruffin's "What Becomes of the Brokenhearted." Jackson said it "flatlined" while DioGuardi put it bluntly: "It's overdone, girl."

Unless the judges decide to save a singer, another finalist will be eliminated Wednesday based on viewer votes, leaving nine singers in the competition.