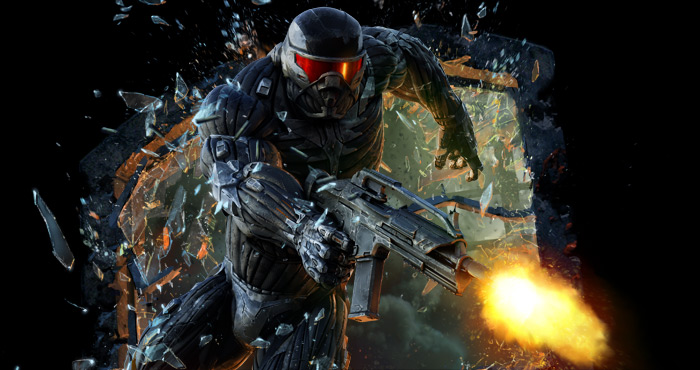 The sequel to developer Crytek's hugely successful 2007 PC hit, Crysis 2 picks up where its predecessor ended. An alien invasion threatens the island of Manhattan and it's up to you to stop it. You play as Alcatraz, a force recon marine who is outfitted with a super-advanced nanosuit to combat the alien menace.

It is this nanosuit that drives the game's core mechanics. The suit allows you to strategically tackle seemingly insurmountable challenges through the use of its three primary modes: armor, stealth, and power.

Armor mode turns you into a walking tank, able to charge headlong into battles, absorbing and deflecting damage  while protecting your health. Stealth allows you to use active camouflage, turning you invisible so you can get the drop on your enemy. Power mode allows you to perform amazing feats of strength. From running at breakneck speeds to clearing an entire building story in a single bound or knocking your enemy dozens of yards back with a single blow, power mode makes you feel like a super soldier.

To reign in your super-human shenanigans - and to add a key element of balance to the experience - all of your abilities drain power from your nanosuit's energy meter. Having to constantly manage your energy pool while fending off waves of enemies requires gamers to play tactically, planning their attacks, rather than running in guns-a-blazing.

It's this constant balancing act, along with some clever and creative open level design, that gives Crysis 2 a wonderful sense of pacing.

Despite the fantastical nature of both Alcatraz's nanosuit and the enemy alien forces, the game manages to immerse you in a convincing world torn by war against an immeasurable power. Crytek's updated Cryengine 3 deserves much of the recognition for achieving this immersion. The world you get to play around in is beautifully realized. The environment is gorgeous. The tall Manhattan skyscrapers feel claustrophobic while the city seems to span forever into the distance.

Objects and in-game characters have an incredibly convincing level of detail and light careens over and between objects and dances across the screen producing lens flares that would make Michael Bay proud. Combined with a superb musical score by Hollywood film score composer Hans Zimmer, this game will make you lose sleep and "forget" to go to work.

This immersion extends to the game's multiplayer experience as well. Here, Crytek hopes to give the Call of Duty and Halo franchises a run for their money.

All of your nanosuit's abilities are present in multiplayer, along with plenty of customizable options for both your suit and weapons for you to tailor your style of play. The six-on-six multiplayer battles can get pretty intense, combining tactical combat with the abilities afforded nanosuited super soldiers.

Crytek has delivered the most engrossing, beautiful and fun game to come out so far this year. It is easily the most impressive-looking game on home consoles and will push your hardware if played on PC.

Crysis 2 is available for the PlayStation 3, Xbox 360 and PC. The game is rated Mature by the ESRB.