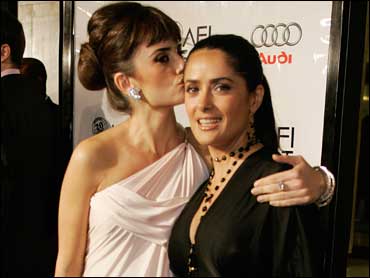 She's an actress. She can dance. She knows a bit about what to say and when to say it. And that's not all - Penélope Cruz is also a photographer.

"I don't show my pictures much, but it's just something I do for me. It's my hobby," the 32-year-old actress told an appreciative David Letterman on a visit to CBS' "Late Show" Tuesday night.

While on the show, Letterman showed the audience several photos Cruz had taken of her good friend of six years, Salma Hayek.

Cruz explained that the photos were taken for Interview magazine.

"That day was funny, because we are both very bossy, but that day I was, like, 'Today, I give the orders,'" she said, describing the day of the photo shoot. "So I put her in a swimming pool for hours and hours. And she behaved really well. She listened to everything."

Then Letterman brought out a photo of Hayek and Cruz on the red carpet at an unnamed event. In the shot, the two actresses were facing away from the camera. Noting Cruz's left hand on Hayek's derrière, Letterman said, "Here's somebody giving her the old hi-ho."

"You know what they've been saying because of that picture?" Cruz asked. "We are like sisters and we have some sense of humor. We did that in front of 100 photographers. And the story now is that we are lovers."

She added, "I'm sorry to say that is not the case."

Cruz asked Letterman if had any comment, but he was, uncharacteristically, speechless. Then he quickly changed the subject.