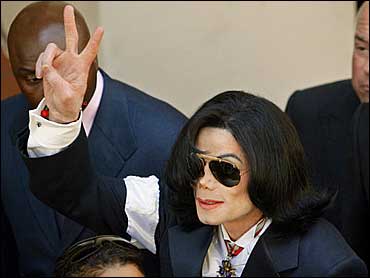 After weeks of listening to testimony from at least a dozen people, a California grand jury is expected to announce a new indictment at any time. Among the witnesses was a young boy who accused pop star Michael Jackson of sexual molestation.

The secrecy surrounding these hearings has been unprecedented. Jurors have been traveling to and from a secure location in vans with darkened windows. Only 12 of the 19 jurors must agree in order to indict Jackson on any charges.

"We really are talking hours or days," he says. "I certainly don't think this will stretch longer than the four-week period that it has gone thus far. I expect an indictment to be issued within days. We likely could see that indictment issued today."

Prosecutors charged Jackson in December with seven counts of committing lewd or lascivious acts upon a child under 14, and two counts of administering an intoxicating agent to the child. The district attorney has taken the case to a grand jury to seek an indictment. Jackson denies the charges.

Copeland explains what would take place: "Essentially, the evidence is presented to the grand jury. The prosecution indicates that they believe a crime has been committed, and they ask the grand jurors whether or not they agree. And if 12 of those 19, in this instance, do concur that a crime was committed, essentially, the foreman will literally take that document with the grand jurors over to a judge. The judge will issue a formal indictment. It will be stamped, it will be filed and the case will move forward to trial. That really is the process. There's no jury instructions. There's nothing much more formal than that, and it's a relatively quick process."

Normally, the grand jury room is off-limits to the defense. But at least in this case, Superior Court Judge Clifford R. Anderson is allowing attorneys to ask witnesses what they know of the case, but there are some restrictions.

The young alleged victim was, not long ago, in very bad shape, according to a family friend. He only had one kidney and it was failing. Part of his face had swollen up as well. But, recently, there has been a report that he is doing quite well.

Asked how his condition may affect the case, Copeland says, "I really think that Tom Sneddon knew all along that this alleged victim was doing quite well. I think that Tom Sneddon sort of hedged his bets that he would be available for trial. I think that's the reason he proceeded with the grand jury indictment, assuming he received one, because he knew this victim would be available for trial. So a healthy victim means a healthy witness at trial for the prosecution. That bodes well for them."