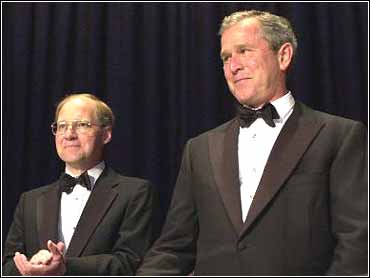 This is party time in Washington. The azaleas are in full bloom and the Washington elite meet and greet night after night. The biggest party this week was the annual White House Correspondents Dinner where "press and politicians all done up in formal dress" applaud the "awarding of prizes to journalists who have exposed the crumminess of the politicians sitting at the head table joining in the ovation and fun," wrote the late Meg Greenfield in her newly published book, Washington. "It's a community affair," she said.

CBS threw a party of its own to honor Bob Schieffer for his ten years as host of Face the Nation. The Hotline described this as an event where "you had to elbow aside nearly every famous face in DC to grab hold of those peppery lamb chops ... but how cool to be where everybody knows the names."

The coziness between Washington reporters and their sources is one of the more annoying things to people outside "our town," and is a dominant theme in Greenfield's book. She says it horrified her when she first came to Washington but, in her search to understand it, she has left a very wise and very sophisticated analysis of how this relationship does and should work. She argues that developing social relationships with public officials is helpful to journalists as long as they are prepared to excoriate them when they do something wrong. Rather than tainting reporting, she believes these relationships facilitate the truth especially when a public official is under the gun. The formal answer at a press conference is unlikely to elicit the level of candor a reporter can find if he knows the official socially and has some insight into his life.

Greenfield is perceptive about the phoniness of Washington and suggests that the tendency in modern journalism not to respect privacy has made many public officials adopt fake personas in private life as well as in public. I couldn't help but note the contrast between her take on "the community" and that of another Washington Post grande damme, Sally Quinn, who wrote a few years back that Washington's problem with Bill Clinton was that he had lied and "lying offends them." Greenfield sees multiple layers of truth everywhere and explores the "double track" language, on and off the record, nuanced by background and deep background.

Another insight in the book is Greenfield's characterization of the "V-Shaped smile, the tightest and most unconvincing of smiles" which she encountered (and used) at social events when she bumped into someone she had just blasted on the Post's editorial page. (She credits the term to Steven Potter in "The Theory and Practice of Gamesmanship.") That smile was much in evidence at this week's CBS party, which tooplace the day after 60 Minutes II had aired its story on former Senator Bob Kerrey and his role in Vietnam. Several of the guests were part of a public relations effort Kerrey had put together to trash the story - and the v-shaped mouths on both sides almost prevented the downing of those peppery lamb chops. Vietnam is still emotional and truth continues to be part of the quagmire.

The line between civility and hypocrisy is another area Greenfield explores. While nailing the hypocrites, she opted for civility. She says it's not the personal relationship which is the problem but how the journalist "handles the pitfalls and temptations." She also makes a fascinating observation that, while it's obviously wrong to be sycophantic and in the tank for a public official/friend, a bigger defect may be journalists who harbor "an abiding, close-minded intractable antipathy to certain individuals and causes."

This book is an ethical tour de force without being preachy or priggish. It is honest about the flaws of journalists as well as politicians and explains why Greenfield was able be so independent while she was so deeply entrenched in the establishment.

(c) MMI Viacom Internet Services Inc. All Rights Reserved. This material may not be published, broadcast, rewritten, or redistributed