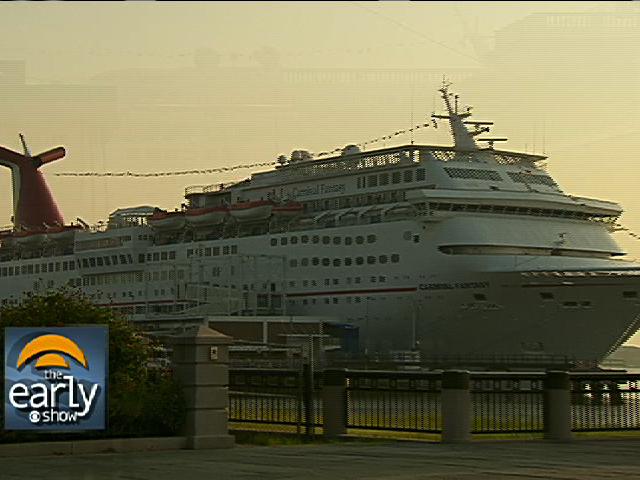 Charleston, S.C., is one of America's oldest port cities. Since the 1600s, ships from around the world have found refuge there. Some of the city's residents, however, wish the waters weren't so welcoming - especially when it comes to giant cruise-liners.

Charleston is world-renowned as a beautiful city. But it's also very small, and preservationists believe the giant cruise ships that dock there might be endangering the city's historical status. "Early Show" Contributor Taryn Winter Brill headed to Charleston to find out what's really at stake.

The colonial city's Southern charm has been maintained by four centuries of Charlestonians who share a collective sense of self-preservation and pride.

But for residents like Dana Beach, some days are more beautiful than others. He sees a new threat along the old waterfront -- cruise ships.Beach, who is also the Founder and Director of the South Carolina

Beach said of one ship, ""It's essentially a floating town; there are towns in South Carolina that are a lot smaller than this ship."

Before the year is over, an estimated 87 cruise liners will dock in Charleston's harbor, just steps away from the city's historic district.

Beach, who is also the Founder and Director of the South Carolina Coastal Conservation League, said of one ship, ""It's essentially a floating town; there are towns in South Carolina that are a lot smaller than this ship."

Charleston may be a port, but Evan Thompson, who runs the city's preservation society, says these boats are simply too big.

"When you look at the waterfront, from a historic point of view, most of the ships are of a much smaller scale," Thompson said.

Thompson also fears air and water pollution, along with increased traffic from the 2,000 passengers who descend upon the city from each ship. He helped nominate his city for the National Trust's 'Most Endangered' list. It didn't make the cut, but Charleston was placed under "watch" status for fear that any more ships might jeopardize the historic character of the city.

Beach said, "Our building, we have to power wash every two months to get the soot off of it from (the ships') smokestacks."

Mayor Joe Riley says there's a simple explanation for that. He told CBS News, "The city doesn't have the power, the legal power, to regulate the water side activities of the State Ports Authority."

He also insists that the cruises are in no danger of damaging Charleston.

Riley said, "The National Trust, I think, just made a big mistake. They're wrong. It's in perfect scale. It's in correct balance. It's good for the city."

Plus, he says, they're keeping people employed.

"The cruise business creates jobs," he said. "From the longshoremen working on the waterfront, to the people who service the ships, to the jobs created in our remarkably beautiful downtown area."

Dolores Hammerlune has been a vendor in Charleston's open-air market for 18 years.

"I enjoy having tourist ships in town," she said. "It's helped all the businesses down here in Charleston."

But are they buying?

But what's good for business isn't necessarily good for the city, Brill said. Although the mayor insists that the Port Authority and its cruise lines have their own strict environmental standards, some residents want more than just blind trust.

Thompson said, "We need to be able to, as a community, go to city council if this gets out of hand and say, 'look, we're tightening the limits."

He added, "If we could simply get a handle on the number of visits, the amount of impact, everybody would be very happy with the ships."

On "The Early Show," Brill added the mayor emphasizes that ships are regulated by the State Port Authority, not the city. But the two sides have agreed that the number of cruise ships won't exceed 104 per year, which, by the way, he doesn't see happening anytime soon. And as he puts it, of the four million visitors they have to Charleston each year - only about 200,000 are cruise ship passengers.