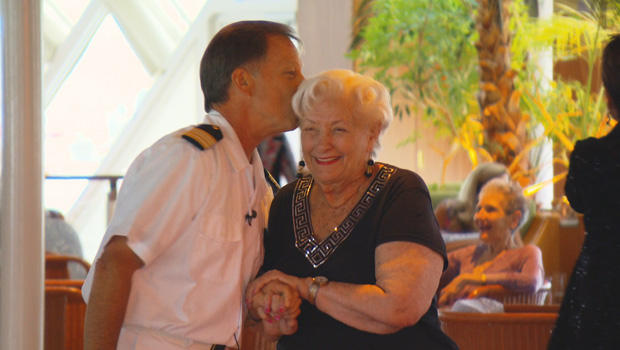 An estimated 24 million people are expected to take cruises this year. One report showed more than a quarter of them are age 60 or older, and more than one-fifth are retired.

Part of the reason cruises are so popular for retirees is because so much is taken care of for them -- cooking, cleaning, entertainment and activities. Of course, when the cruise is over, most of them return home to their regular lives. But Lee Wachtstetter found a way to travel the world without ever leaving home.

You could say the 88-year-old Wachtstetter has earned her sea legs.

Aboard the Crystal Serenity, she’s known simply as Mama Lee. She’s been living there for the past eight years.

And how often does she talk to her family back home? “Oh, I talk to them every day. I’ll talk to them twice a day if it means I don’t have to be there!”

Wachtstetter and her late husband, Mason, took nearly 100 cruises together before he died in 1997. “The last thing he ever said to me was -- this was the day before he died – ‘Don’t you quit cruising.’

“I started frequent cruising. But I got very, very tired of packing and unpacking. So I said, there’s got to be a better way to do this.”

Mama Lee sold her house in Florida, along with her car and most of her belongings, and never looked back.

“Everybody knows her, she’s knows everybody,” said Birger Vorland, captain of the Crystal Serenity. “She’s a little bit of a diva, in a good way. She gets along with her day, she makes herself busy, and she has her things and her opinions, and she’s a wonderful person.”

Greenberg asked Wachtstetter, “At your age, there are a lot of people who would say, ‘Well, I’m going to go to a retirement place.’”

“Oh, no, not me. Why do that?” she replied. “I’m now a great-grandmother. My grandchildren are having children. But I don’t want to be there every minute for that.

“I love babies, but they grow up!” she laughed.

Mama Lee has now done more than 240 cruises around the world, and visited hundreds of ports. But where the ship is going? Irrelevant. For Mama Lee, these days, the ship is the destination.

“Everything is ‘Been there, done that.’ If I’ve been there and done that, I don’t go off the ship. And I love it when everybody goes touring. I got the whole ship to myself with all the help.”

“You’ve got this figured out!”

“And you don’t really get off the ship anymore?” Greenberg asked.

Cruise director Rick Spath considers himself part of her extended family at sea.

“That’s Lee: She doesn’t care where the ship goes,” Spath said. “And she loves to dance her way around the world.”

“Do you ever sit back and think about what your life would be like if you weren’t on the ship?” Greenberg asked.

“Very boring,” was her response. “I think I live a fairy tale existence. It’s not a real life, I realize that. Not everybody does this. But a lot of people could.”

How to create a well-rounded estate plan

How to maximize your retirement savings goals

Get your retirement planning back on track

How to make the most of your investments
More
Thanks for reading CBS NEWS.
Create your free account or log in
for more features.
View CBS News In
CBS News App Open
Chrome Safari Continue
Be the first to know
Get browser notifications for breaking news, live events, and exclusive reporting.