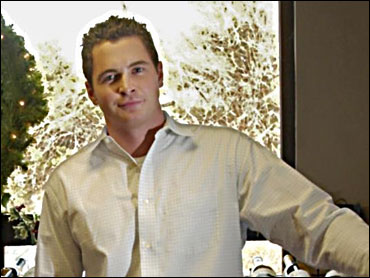 United States authorities are probing the disappearance early last month of a Connecticut man who was on a honeymoon cruise through the Mediterranean. They say it appears foul play may have been involved.

George Allen Smith IV was halfway into the cruise with his bride, Jennifer Hagel, when he vanished while the ship was off the Turkish coast, according to The Early Show co-anchor Hannah Storm.

"The captain came on and announced to everyone that there was a passenger missing," says Linda Bruck, who was on board the Royal Caribbean's "Brilliance of the Sea" with her husband, Larry Bruck.

They say they didn't see Smith or Hagel, but heard all the rumors.

"That there was a possibility he had winnings that people knew he had won and that they were after," is how Larry Bruck describes one such rumor.

"The most outrageous rumor I heard was that there was an old boyfriend on board," says Linda Bruck.

Another passenger thought something might be amiss when Smith disappeared.

Clete Hyman, who was in an adjoining cabin to that of Smith and Hagel, recently recalled what he heard through the walls in the early morning hours of July 5: "The impact, it sounded like something really heavy, and my first thought was maybe throwing furniture overboard," Hyman said on "Scarborough Country" on MSNBC. "All of a sudden, there (was) some very loud arguing out on the balcony."

Candid testimony like that is unlikely to be repeated anytime soon, Storm observes, since Turkish authorities turned the case over to Washington, and the FBI and U.S. Attorney's Office are now in charge of the investigation.

Witnesses have been gagged, and the U.S. officials are doing all the talking.

Says U.S. Attorney Kevin O'Connor: "This is not going to be an easy case. We have a moving crime scene, we have a group of international passengers who have dispersed. So, it may take a long time to piece together what happened that night."

Turkish authorities had interviewed and released Hagel, and a Turkish prosecutor has said Hagel isn't a suspect.

Sherman, who still lives in Greenwich, says he has been watching the case take shape.

On The Early Show Monday, he told Storm the Smiths are a "well-known family. …Everyone has always had nothing but the best regard for this family. Never any trouble. The best reputation. Nice people, active in the community. Again, I don't know them now, but I know of them. No one would have anything negative to say about them at any time."

Hagel and both her and Smith's families have been completely tightlipped, which Sherman says he respects: "A lot of people are not disappointed, but frustrated with that. We in the media seem to be frustrated by that. But, as opposed to some of the other cases that we've seen, whether it's (Michael) Jackson or (Scott) Peterson, I laud them, both sides, for not parading out lawyers or family spokespeople or whatnot.

"According to the U.S. Attorney in Connecticut (Kevin O'Connor), who has now got control of this case, they've been nothing but cooperative, both sides. And that's all they really need to do."

Turkish authorities say Hagel told them she and her husband had been in the casino, drinking and gambling, and she doesn't remember what happened when they got back to their room. Yet, Hyman says he heard arguments, perhaps furniture being moved around.

Sherman discounts the apparent discrepancy: "You have to assume on a cruise ship, everyone is there to enjoy themselves. You can't vilify them that they were drinking. That's what you are supposed to do on vacation and on your honeymoon."

Sherman agrees with O'Connor that probers have their work cut out for them: "(This wasn't) just a crime scene, it was a moving crime scene. And a private crime scene. Who knows if the cruise ship security people are cooperating fully? They have (potential) civil liability."